Slang is much a part of the military as MREs, physical fitness tests, and shitty base housing. Each branch and... 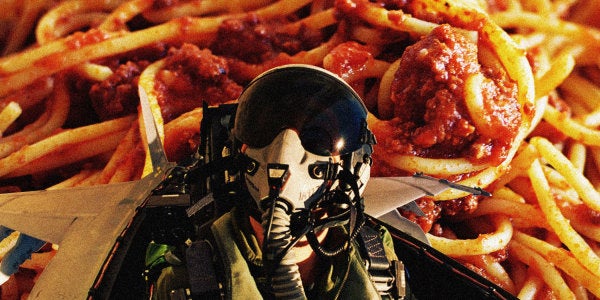 Slang is much a part of the military as MREs, physical fitness tests, and shitty base housing. Each branch and unit has its own verbal shorthand, and Navy aviators are no exception — even though much of the colorful language deployed by pilots is a shorthand for expletives you can use over radio transmissions without getting slammed for misconduct.

Task & Purpose scoured the web to find these nine fantastic naval aviation slang words that you might consider adding to your lexicon in a pinch.

“Goodbye” is such a dull way to part with someone. That’s where Alpha Mike Foxtrot — “Adios, motherfucker” — comes in. So the next time you peel out of formation or just want to bid your pals adieu, feel free to drop this clever little word bomb.

The term was originally coined to describe a phantom or a ghost in 16th century English. For Navy pilots, however, a bogey is an unidentified aircraft spotted in the sky. The word is typically used to describe an indistinguishable unfriendly plane. Though this is unsubstantiated, we’d also like to think of any enemy aircraft as a proverbial booger that needs to be picked and flicked by the Navy.

Do you like ice cream? So do naval aviators. We don’t know if you’ve ever seen someone operate a soft-serve ice cream machine, but it looks like, well, a pile of… dog shit? You see where this is going: According to Jalopnik, “Pilots always know if there is a good batch of dog.”

One of our favorites, “in the spaghetti” is what you are when you catch one of the four arresting wires on the flight deck. You want to land in the spaghetti. This is one instance wherein you don’t want to lay off the sauce. Pun intended.

If you’re picturing rats scampering around in the middle of the night looking for cheese, you’re not far off from guessing what this slang term means. Short for “midnight rations,” it’s the long-traditional late-night galley hop that a pilot takes before heading out on a nighttime flight. Sorry, Taco Bell: The Navy invented fourthmeal.

The ship that bore your aircraft has a fitting radio name: Mother. She’s home. Be good to your mom and she’ll make sure you get back to the states in one piece. We, however, prefer to imagine an aircraft carrier as more of a mothership, ferrying UFOs from place to place.

You know when you get nervous, and your whole body tenses up from top to, well… bottom? If you end up in a hairy in-flight situation, the pucker factor increases exponentially, hence this useful term for when things go sour.

No, it’s not a place where you keep your potatoes while you work out at the gym. The spud locker is the part of an aircraft carrier deck where you don’t want to land. If you hit it, you’ve flown in way too low while trying to bring down your aircraft.

When shit hits the fan, an operation can go “tits up.” But we all know it’s not exactly kosher to shout that over the radio. “Tango uniform” is a much safer bet. If you want, you can imagine Navy pilots dancing around in their quarters in their flight suits. But that’d be a very different kind of tango uniform.