While most of us don’t haggle over prices at our local market, the ability to negotiate still comes in handy.... 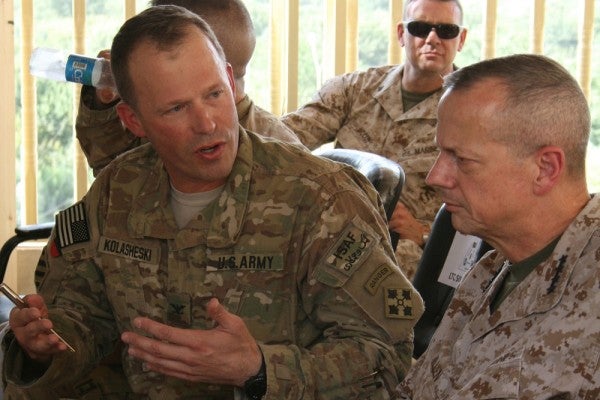 While most of us don’t haggle over prices at our local market, the ability to negotiate still comes in handy. Like when you’re settling the bill and want to convince your girlfriend that she should pay for her $30 Maine lobster her damn self. Split the bill, my ass.

It’s also an invaluable skill when you’re trying to buy or sell a car. Especially a used one.So, if you’re tired of getting screwed over by the sleazy car dealer off base, you might want to brush up on your negotiating skills.

Task & Purpose spoke with Benjamin Voce-Gardner, a Navy lawyer and an Iraq War veteran with 10 years of litigating experience. He says there are three things you need to know when you’re negotiating: how to accurately assess value; how to use leverage to get what you want, and when to walk away.

Related: Tips from a military lawyer on how to win any argument »

“You need to negotiate aggressively and hard with another person, while not infuriating them or pissing them off,” says Voce-Gardner, adding “to the extent that you do infuriate them, you have to have a personality that allows you to make amends quickly so that even if you're not emotionally invested, if they become emotionally invested, you can walk them away from that ledge so you can continue to negotiate about value and not fight over ego.”

Which is why it’s important to understand the difference between an argument and a negotiation.

“You can argue about just about anything,” explains Voce-Gardner. “When I think of a negotiation, I think about an exchange.”

While an argument may determine who has to settle the stakes, meaning the loser, a negotiation involves a discussion, and ideally, a compromise on what those stakes will be.

The first thing you need to have before negotiating?

An accurate assessment of value.

Maybe you learned to drive in it, went on your first road trip, or you lost your virginity in the back seat — if that’s the case, don’t tell a potential buyer — but regardless of your attachment to it, that doesn’t change its monetary value.

“You have to be able to distinguish real value from emotional attachment,” says Voce-Gardner. “It’s not personal. When I think of negotiations, I think of negotiations over money or property, and whenever you’re dealing with money or property, you can never make it personal. As soon as you make it personal, you’re gonna lose the ability to accurately assess value.”

However, that doesn’t mean you can’t get more for it than what it’s valued at, you just have to have reasonable expectations.

Which is why you need to understand leverage.

Leverage is something that isn’t necessarily apparent at the negotiating table, explains Voce-Gardner.

“It’s something that is external to the negotiation, but entwined with it nonetheless.”

So once you know the value of a thing, how do you get more for it, and just as important, how do pay less for a product you want?

“If I want to sell my car, and it’s only worth $2,000, I want to get more than $2,000, obviously and you want to pay less than $2,000,” says Voce-Gardner, who adds that leverage might be the seller knowing that the buyer’s car just died last week, and they need a ride as soon as possible for work.

“Understanding that you’re in a position of distress, for lack of a better word, probably allows me to push my price up a little bit higher because you need to get that car quickly,” says Voce-Gardner.

Alternatively, if you’re the buyer and you know the other guy’s girlfriend absolutely hates his car because she’s embarrassed to be seen in that beat-up jalopy, you might be able to make him drop his asking price.

Using leverage is about assessing what the other person wants, why they want it, and how you can use that to your advantage.

Lastly, you need to know when to walk away.

“Two people can honestly disagree over the value of something, and perhaps they can’t reach an agreement,” says Voce-Gardner.

At that point you should probably step back and revisit later, having shown that you’re willing to walk away from the table. Of course, if the other person isn’t negotiating in good faith, there’s no reason to come back.