It’s a story as old as the internet itself: Boy meets girl, girl falls for boy, boy asks girl to... 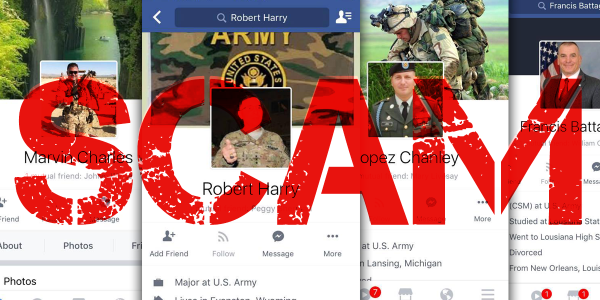 It’s a story as old as the internet itself: Boy meets girl, girl falls for boy, boy asks girl to wire him thousands of dollars and then vanishes off the face of the earth forever. Well, at least that’s the experience many people have had since the rise of internet dating and the online scams that have followed. By far one of the most successful schemes involves American service members. Well, not real ones. But people pretending to be them.

The process is pretty simple. A scammer — usually from West Africa — poses as a deployed American soldier in search of love. Make no mistake about it, these guys are professionals. Well before stalking their victims, they meticulously meld online images of real soldiers with fake names and personalities. They even create social media accounts and other various online footprints to ensure their aliases are as realistic and attractive as possible. After being matched with an interested party, these con artists slowly reel in their prey with affectionate messages of passion and desire. Once the target is hooked and believes he or she is in a real, full-fledged relationship with an American service member, the scammers goes in for the kill, asking for thousands of dollars at a time to help address a personal crisis or material need.

You’re probably wondering how anyone could fall for something like this, but it’s actually quite simple. Dating websites like Match.com and eHarmony have normalized the experience of igniting an e-romance before actually meeting someone, and it’s only gotten easier with the invention of mobile apps like Tinder, Zoosk, and countless others. Given these circumstances, it’s clear why the many people seeking love online are obvious targets for predators. Once hackers throw in a photo of an American soldier — and all the fantasies associated with a strong, brave person halfway across the world — it’s an easy sell.

This tactic is highly effective and has cost victims hundreds of thousands of dollars according to Chris Grey, Army Criminal Investigation Command spokesperson.

“It is very troubling to hear these stories over and over again of people who have sent thousands of dollars to someone they have never met,” Grey said in a recent Army press release. “We cannot stress enough that people need to stop sending money to persons they meet on the Internet claim to be in the U.S. military.”

The Army isn’t alone in this fight. Many victims have joined forces to combat romance scams and forewarn potential future targets. One of the most popular websites for victims of past scams, romancescam.com, provides users with a suite of tools for identifying potential predators, including an IP checker and a scam test to determine if your beau is who they say there. There are also plenty of online communities on social media for past, present, and potential victims, including the Facebook page for Military Romances, which issues frequent “fraud alerts” when they’re notified another hacker has struck gold.

It’s easy to feel bad for the victims here — how could you not? — but there’s something else at stake, too: the security and privacy of our soldiers’ identities. After all, every fake profile is created using a real soldier’s picture. According to Grey, this not only harms the reputation of the individual service member, but the reputation of the military as a whole. “We don't want victims walking away and thinking that a U.S. soldier has ripped them off, when in fact that soldier is honorably serving his or her country and often not even aware that his pictures or identity have been stolen,” he explained.

But it could be worse. Israeli soldiers have reportedly been falling for similar “honey traps” laid by Hamas, allowing the Palestinian fundamentalist group to hack their phones to access their cameras and microphones while posing as young, beautiful women on dating apps. Although Israel’s intelligence community claims no major military secrets were divulged, it’s an international embarrassment and a jarring reminder of how love can blind people — especially over the internet.

Crime never sleeps, but it definitely has seasons. With Valentine’s Day rapidly approaching, Grey and the Army CID aren’t taking any chances. Along with its efforts to alert people about this enduring issue, the Army has provided tips for identifying potential scammers and is urging anyone who suspects they’re being swindled to contact the Internet Crime Complaint Center.

Their most important piece of advice: “Don’t ever send money!”