We all know what performing “like a girl” implies — to be feminine, ineffectual, and weak. But two veterans, Kinessa... 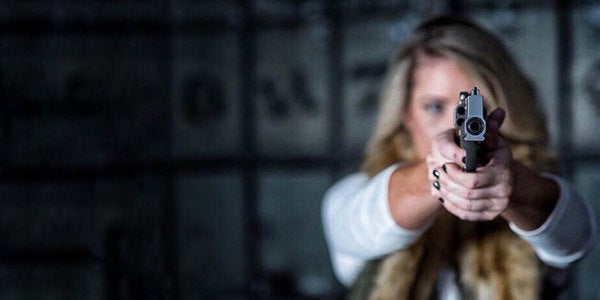 We all know what performing “like a girl” implies — to be feminine, ineffectual, and weak. But two veterans, Kinessa Johnson and Tonya Greenwood, prove that “shooting like a girl” means something else entirely.

The two shooters, veterans of the Army and the Navy respectively, are breaking down stereotypes about women who know their way around a shooting range. And let’s just say that after speaking with them, none of the writers at Task & Purpose want to end up on the wrong end of their guns — bare arms or armaments.

When did you first learn to shoot? Age six.

How often do you visit the range?  I try and go as much as possible but I haven't been able to go with work because I'm gone a lot.

Do you have a favorite gun? I would have to say I'm a huge Glock fan. I carry a 19 Gen 4 because I know that no matter what the likelihood of it having a malfunction is almost impossible. Could it happen? Yes, but it's proven in all kinds of elements and situations that it's dependable.

What’s one thing you wish people understood about guns? I wish people would stop blaming guns for things happening. It's not guns that are an issue; it's bad people who want to cause harm to people.

What’s one thing gun people get wrong about you? Maybe that I'm some kind of expert. I'm not: I like to think that it's a skill that you constantly thrive to make yourself better at. It's a skill that depreciates if you don't do it a lot.

What do you think it really means to “shoot like a girl?” I don't think a woman shoots any different than a man. One better than the other. I have never taken it seriously.

When did you first learn to shoot? Around 12 years old

How often do you visit the range now? A couple times a month

Do you have a favorite gun? My favorite gun is the first gun I ever built for hog hunting: a 300 blackout pistol. It has a 8.5″ KAK industries barrel, Shockwave blade, Geissele trigger, and an Aimpoint CompM4 optic. I've taken a lot of game with it over the last couple of years, and it's been one of the most reliable firearms I own. I'm very proud of it.

What do you think of the phrase “gun bunny?” I think it's a derogatory phrase that's been commonly thrown around the industry to describe a woman whose affiliation with the firearm community is more likely for attention instead of actual interest in the sport. It's often a term used to dumb down the person’s knowledge as well, and it instantly resonates that they do not take the female seriously.

What’s one thing you wish non-gun people got right about guns? Terminology.

What’s one thing gun people get wrong about you? I think many people think I must have a man behind me in the shadows helping me and guiding me through my journey, when in reality I do everything by myself. I run my business by myself and I build all my firearms by myself. When I do run into problems that completely stump me, I'm not too proud to reach out and ask for help or advice from lead industry affiliates, though.

What do you think it really means to “shoot like a girl?”  I think it means being a strong female and bringing some class and sass to the range or whatever shooting platform you represent.