The best boy in the Marine Corps, Chesty XV, is living the good life 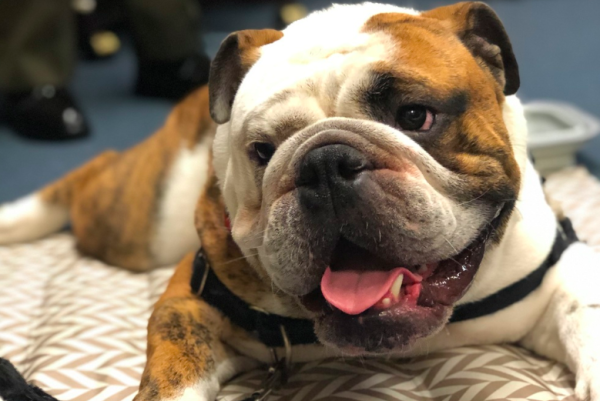 I don't always drop everything to spend a few hours with a short, squat Marine, but when I do, you can bet it's for Chesty.

Chesty XV, the one-and-a-half year old English Bulldog who serves as the Marine Corps mascot, is not just some ornamental figure. He puts in the work, especially in the summertime when he participates in parades conducted at Marine Barracks Washington on Friday nights.

Sure, the Commandant, or any number of high-ranking officers might be present — but the real show-stopper is Chesty, who was recently promoted to lance corporal. (That's right, there are real human Marines out there who are outranked by this chunky pup.)

The wrinkly, stout, quicker-than-he-looks mascot is living the good life. He typically starts work on Thursdays to prepare for Friday's parade, and otherwise does, well, what dogs do. He also has a team of seven people ready to “make him look good,” including a tailor for his uniform, one of his handlers Marine Sgt. Dhilexa DeJesus told me on Friday as I shadowed Chesty on his normal Friday morning routine.

While we waited in an air-conditioned space for the parade rehearsal to start, Chesty's handlers took out a cooling pad that he immediately plopped onto. They filled up some water for him, which he quickly gulped down. Occasionally he'd bark as we talked — half reminding us who the real focus of attention was, half signaling he wanted more treats.

He usually got them — it's almost impossible to say no to that face.

When the rehearsal started, Chesty waited with his handler, Marine Cpl. James Bourgeois, until it was his turn to come out. He came down the center walk, tongue out; he was met with applause from his fellow Marines.

“Ladies and gentleman,” the parade announcer said during the rehearsal. “We are proud to introduce the official mascot of Marine Barracks Washington, D.C., Lance Cpl. Chesty XV. A pedigree English bulldog, Lance Cpl. Chesty XV enlisted in the Marine Corps on 19 March, 2018, and completed recruit training on 5 July 2018.”

When they got to their marker, Bourgeois said under his breath to the dog, “Chesty, sit.” Almost as if Chesty knew this was just a rehearsal, he continued to stand and glance around at the onlookers.

Chesty is a welcomed presence around the barracks; almost everyone who saw him on Friday made a point to greet him with a “hey bubba,” or “how ya doin' big boy,” partnered with a head scratch and pat. And DeJesus told me that when he was a puppy, he got some special attention from one of his favorite people — Mrs. D'Arcy Neller, wife of former Marine Corps Commandant, Gen. Robert Neller.

“He was, like, obsessed with her,” DeJesus laughed. “Whenever they would host a parade, he would try to yank me to get closer to her because she'd always give him treats, so he would always try to go up to her and jump on her, and I'm like, 'You need to behave, you're in public!'”

He's smarter than his predecessor, Bourgeois said, because he knows how to get what he wants.

With Chesty XV, you have to be on your toes in a way you didn't with Chesty XIV. For example, last year, Bourgeois took Chesty up to Capitol Hill to tour the senate and meet with some lawmakers. It was time to leave and get back in their van, but there was one problem: Chesty really does not like vans.

“He hates vans, he will not get into a van. You have to physically pick him up and put him in the van,” he said. “And I was in my blues outside by all these senators and politicians, chasing him around a field to get him in the van.”

DeJesus said she's also had to carry him before to get him into a van. “He can be a bit of a diva,” she laughed.