How To Build A Strong Bond With Your Dog

While building a bond with your dog may seem like a no brainer, it actually takes more work than you … Continued 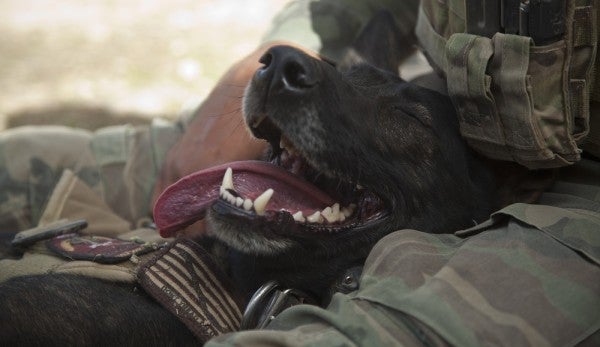 While building a bond with your dog may seem like a no brainer, it actually takes more work than you may think.

Yes, that tail may be wagging back and forth with enough kinetic force to power a small village, but that could be because you’re eating a double-bacon cheeseburger, and your four-legged friend is anxiously waiting for you to drop it.

A strong bond is something else.

Task & Purpose turned to Mike Dowling, a Marine veteran of the Iraq War, and a former military working dog handler to ask him how to build and maintain a healthy relationship with one’s dog.

For starters, it begins the moment you meet, explained Dowling, and anyone who has ever had one can attest to that.

However, like all relationships it doesn’t start fully formed.

“There’s no shortcut to establishing a bond with your dog, said Dowling. “It takes time and trust and you can’t do anything over time to betray that trust.”

Maintaining a strong bond with your dog isn’t that different from maintaining a healthy relationship with a person.

“A lot of the rules in terms of building a relationship and not doing something in a relationship with another person applies to a dog,” explained Dowling. “It’s based more on emotion and feeling, because it’s not like you can talk to your dog, but you can speak to them in other ways.”

So since long drawn out conversations over beers are out of the question — or should be; getting your dog sloshed is way less fun the next day — here’s what you can do to build that bond.

First off, you can’t force it.

If you or your dog are having a crappy day, then maybe you should skip that training session you had planned or maybe pass on obedience class tonight.

“They’re going to sense that from you, and likewise if you show up and your dog is having a bad day, you need to be able to recognize that because you don’t want to train them when you know that’s something off because you’re just going to add more stress.”

The easiest way to build a strong relationship with your dog is to just do something fun together.

Additionally, Dowling said you should reinforce obedience, not only because it’s good to have a dog that won’t pee in the house or yank on the leash, but because it gives you something to work on together.

“Also obedience every single day because it’s the foundation of training. It doesn’t have to be a full-on training session, you just do it everyday,” said Dowling. “It becomes ingrained in them and they just respond to you.”

Another thing you can do is go on adventures together. Yes. Adventures.

“One of the things I love about dogs is that it kind of makes you be an active person,” said Dowling. “You can’t have a good relationship if you’re just inside with your dog. You need to take them outside and be active with them. Take them exercising with you, go running with them, get them out of the typical environment and take them into new environments with you.”

Exploring new places with your dog gets you both off the couch and out and about, but it also reinforces their trust in you.

“Just take them into new environments,” said Dowling. “That just makes them want to trust you more because they’re going to trust that you’re leading them in a way that they’ll end up returning home safe, and you’re going to keep them protected.”

Now that we know that a healthy relationship requires, here’s what it looks like.

“A healthy relationship is when you’re just clicking on all cylinders, one and the same,” said Dowling. “You move as a dog team together. Your energy is in sync on every level there is. You’re feeling good, they’re feeling good and just by the slightest, subtle movement, you can tell what your dog’s emotions are.”

Building a strong bond is one thing, now that you have it, don’t lose it.

“You don’t want any gaps,” said Dowling, explaining that this means unnecessary breaks in training and changes in your daily routine, and of course, long periods of separation.

“You don’t want to be separated from your dog for an extended period of time because then they can get confused and get separation anxiety,” said Dowling.

In short, if you don’t need to leave your dog, then don’t.

“Obviously you don’t need to be with them 24/7, but if you don’t need to be gone without them for a week, month, or whatever it is, let them come with you if you can,” said Dowling. “Don’t put them in a position where they don’t see you for an extended period of time.”

“Never betray the dog’s trust in you,” said Dowling. “Don’t unnecessarily cause any stress on them in any way whatsoever.”