One of the high points of President Donald Trump’s The Salute To Our Armed Services inaugural ball occurred when a... 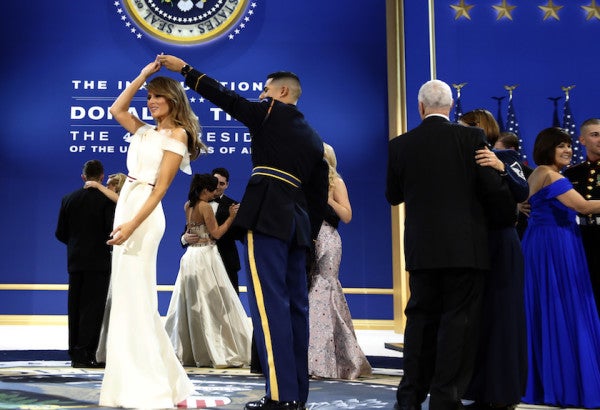 One of the high points of President Donald Trump’s The Salute To Our Armed Services inaugural ball occurred when a soldier who was dancing with First Lady Melania Trump spun her, making her smile.

“I didn’t want it to be just a boring dance,” Army Staff Sgt. Jose Medina told Task & Purpose. “I’m Latino and I was expecting something more than a slow dance. So I asked, ‘can I spin you?’”

“She’s pretty nice,” he added. “Obviously everyone’s got their opinions of her. But she was very nice, and she was nervous. You can only imagine. She just became the first lady.”

Medina, who was chosen from the 3rd Infantry Regiment to dance with Trump a month before the inauguration, said they were both anxious in front of all the cameras.

“I was nervous as hell,” Medina said.

Marines Warn Against Too Much Fun At Trump’s Inauguration »

To break the ice, he told her she was beautiful and had a beautiful family. She opened up to him as well, asking about where he was from, his family, and his service.

“It was a pretty cool experience,” he said.

Before the official dance, Medina spent 45 minutes with the Trump family, including the president.

“I feel like he’s going to be a great Commander-in-Chief,” he said. “He’s all about the military told us he was going to look out for us. My impression of him was amazing.”