What The Military Is Like 5 Years After ‘Don’t Ask, Don’t Tell’ 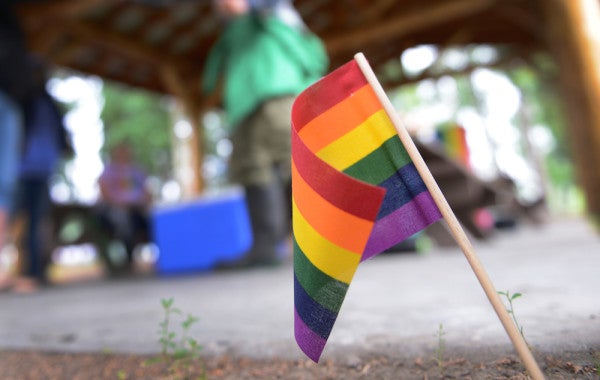 For 17 years, the military’s “Don’t Ask, Don’t Tell” policy prohibited lesbian, gay, and bisexual persons from disclosing their sexual orientations at the risk of being kicked out. Over the course of the policy, more than 14,500 service members were discharged for being homosexual, caught performing homosexual acts, or disclosing their orientation as anything other than straight.

Now, it’s been five years since the repeal of the bill, and not only are lesbian, gay, and bisexual service members able to openly discuss their sexual orientations, but just this year, Defense Secretary Ash Carter lifted the ban on transgender men and women as well. According to a 2011 RAND report, at the time of the repeal, an estimated 46,000 service members identified as gay, lesbian, or bisexual. For some, the policy repeal was just a formality, but for others, it was life-changing.

Trey Robertson, today an Army captain, arrived at the U.S. Military Academy at West Point in July 2008. Having grown up in a military family and volunteering to serve under “Don’t Ask, Don’t Tell,” he had preconceived ideas of what life was going to be as a gay cadet.

“I had a very negative opinion of what my life was going to be like, but I was going to do it anyway,” Robertson told Task & Purpose. “Nobody in uniform knew anything. It was all hush hush, because nobody’s asking, and therefore, I’m not telling. Up to that point, very few people knew, even back home.”

Under “Don’t Ask, Don’t Tell,” service members caught performing homosexual acts could be, and were, dishonorably discharged. These acts included stating that you were homosexual or bisexual; engaging in, attempting to engage in, or soliciting a homosexual act; or marrying, or attempting to marry, someone of the same sex.

So Robertson kept his head down, attended his classes, and focused on training, telling no one of his sexual orientation. His senior year, however, he found solace in a secret group of LGBT cadets.

“This sounds bohemian, but there was an underground culture at West Point. [To go] from having had no one to talk to, to having a group of people to be around was actually really cool,” he said. “Post-repeal, it was less fun, because it was no longer this clandestine informal organization.”

“In my entire time at West Point,” he said, “I’ve never had any negative experience because of it. I have more of a rose-colored image. With the exception of being a cadet, I had never really known a military that was hostile or unfriendly.”

He acknowledged that this is not true of others’ experiences, and suggested that at certain bases in more conservative states, fellow soldiers may still harbor anti-gay sentiments.

But compared to the early 2000s, at the height of “Don’t Ask, Don’t Tell,” LGBT service members faced harassment, coercion, and denigrating slurs. However, Robertson said now, individuals who mock LGBT service members are more the outliers than the norm, adding that the culture will catch up to the policy eventually.

He also spoke of a warrant officer who he worked with early in his career, who was still afraid to come out. The officer then scolded Robertson for bringing it up.

“It was a shock to me that people still consider this to be a big secret,” he said. “It’s not like he was 18 and hiding it from his parents. He was in his 30s with a steady boyfriend.”

However, Robertson acknowledged that there are a lot of people who still fear the stigma of being gay because they spent so much of their career in a world that didn’t accept them.

Regardless, since he commissioned, Robertson said his life has been relatively normal. He’s now happily married to a fellow West Point graduate, but they serve in separate locations.

“I’m sure that it is just the same for us as it is for everyone else. Other than that, I feel like it’s anticlimactic,” he said. “We’ve had a pretty fantastic run of it, aside from the difficulties of being married to another military person. We’ve never been stationed together, there have been leaves and long weekends, and seven months at Fort Sill, and that’s the extent of it.”

The biggest issue Robertson encounters is people not knowing what to call his husband, Chris.

“A battalion commander will come up and start talking to you and go, ‘What am I supposed to call him?’ referring to my husband,” Robertson said. “I reply, ‘You can just say, ‘husband’ if you want, sir.’”

As far as where the military needs to go, Robertson said that with the repeal of “Don’t Ask, Don’t Tell” and the Defense of Marriage Act, “The game is over. We’ve won.”

Airman Victor Valenzuela’s experience, however, is much different.

Valenzuela is transgender. Born female, he joined the military in 1993 as a woman who identified then as a lesbian, but kept details about his wife and their two children a secret in order to protect his career.

And throughout his career, there were several times this secret was almost exposed.

Many of the people in Valenzuela’s unit jumped to conclusions, believing that his wife was his sister. He didn’t correct them; he couldn’t. When his wife had a miscarriage, Valenzuela could do nothing, because telling his boss would mean the end of his career. The couple also couldn’t share medical benefits or spouse housing allowance. Once they had children, things got even more complicated.

The couple has a son and a daughter, and before Valenzuela’s transition, they were raised to know they had two moms. But this knowledge almost gave him away a number of times.

“I don’t know if you’re often around kids, but they say the darnedest things at the darnedest times,” he said. “So there were many times that my children almost outed me. We purposely told them never to lie. If someone would say, ‘Is that your mom?’ they’d go to say, ‘I have two moms.’”

Victor and his wife Bunny

Valenzuela added that once he recalls quickly feeding his son a candy to get him to stop talking in front of other members of his unit. Sometimes, he and his wife had their children call them by their first names in public as well.

Around 2007, he recalled, a number of helicopters had gone down in Iraq, and Valenzuela became fearful for his life, and what would happen to his wife and children if he died.

He confided in his female roommate at the time, and gave her a letter for his wife containing his last words. Valenzuela told her his secret and had to trust that if he died, his roommate would deliver the letter, or if he survived, be discreet enough not to tell anyone else.

He added, “I remember thinking, Did I just shoot myself in the foot?”

Valenzuela didn’t know if he would have a career to come back to if he survived the tour. Luckily, his trust was placed in the right person.

When “Don’t Ask, Don’t Tell” was repealed, he was serving as the commander of a squadron, but he didn’t come out immediately. His family then relocated to Oklahoma.

That was also the day that he came out the first time to someone he worked with. As fate would have it, a co-worker from Oklahoma was at the same courthouse in New York and saw Valenzuela with his bride and their two children.

He begged the coworker not to tell, and she replied, “I won’t if you won’t.”

The co-worker’s child was marrying someone of a different race, and she didn’t want anyone back in Oklahoma to know.

“Here I thought I was the only one being discriminated against. But we still have racism,” he said.

But the day Valenzuela went to leave his command at Oklahoma, he finally came forward and told his boss and his unit. Some people said they knew all along and others who had no idea. But there was no hostility.

“It was marvelous,” he said.

And then Valenzuela made the decision to finally come out as transgender. He had originally planned to wait until retirement to transition, but he got pushback from his new command about his looks. This continued discrimination made him realize it was time to fully accept himself.

“I didn’t want to wait anymore,” he said,

Valenzuela is among 15,000 other service members believed to identify as transgender, who were banned from service prior to June 30, 2016.

The Air Force has only recently started covering transition treatment, so Valenzuela has been paying for his out of pocket.

However, he said he doesn’t mind, because he described his doctors as incredible. Most importantly, he finally gets to be himself with his wife and children and at work.

“We are not in the closet or hidden by any means anymore,” he said.

Though both Richardson and Valenzuela are grateful for the policy change, they both acknowledged that some individuals’ views may still be negative. Culture change doesn’t happen overnight, but they are hopeful for the military’s future as a fully integrated force.