It’s Not Stolen Valor On Halloween

Stepping into BDUs and pinning a bunch of valor medals on your chest when you haven’t earned them is fucked... 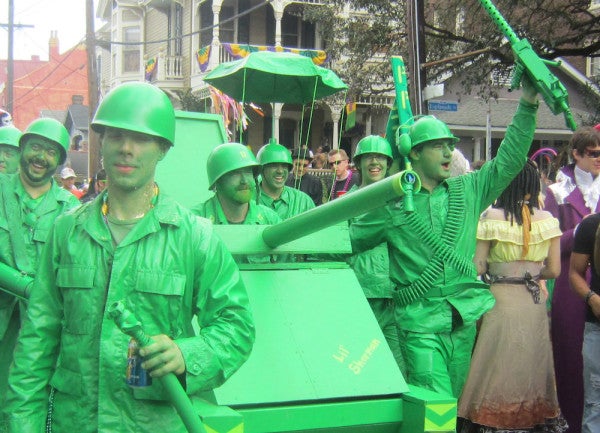 Stepping into BDUs and pinning a bunch of valor medals on your chest when you haven’t earned them is fucked up, and some states have even tried to make it punishable by fine and prison time.

But Halloween is one out of 365 days where this shouldn’t be an issue. It's the only time of year where civilians like me should be able to put on a flight suit and feel like “Top Gun” to escape the sad reality of sitting behind a computer screen for 16 hours a day.

There is no real legal implication for civilians who dress in a military uniforms year round. But discussion boards on sites like Rallypoint and Reddit reveal that veterans have conflicting feelings about the issue of stolen valor, even on All Hallows’ Eve. Though some find it harmless, others think it’s deeply disrespectful.

On veteran wrote, “I personally think it would be disrespectful to wear my military uniform as a Halloween costume. I also hate to see civilian adults wearing them, because I think they should know better.”

Another on the same thread said that civilians should not be allowed to wear a military uniform anytime, adding “What bothers me is if a grown man is wearing a military, police, fire, or medical uniform and has not earn it.”

And thanks to viral online media, we all know what can happen to those accused of stolen valor, between the “make him famous” posts and all the stolen valor YouTube videos.

But Halloween is most importantly a day for playing make-believe — the only day adults can escape their 9-to-5 jobs and pretend to be something they’re not.

Related: 5 Halloween Costumes Based On Military Stereotypes (That Are Kinda True) »

No one who dresses up like a naughty nurse on Halloween goes around administering flu shots or tending to wounded trick-or-treaters. Nor do people who dress like cops immediately pull out their plastic handcuffs and start arresting the scores of people who, on this particular date, don masks and commit crimes.

It’s the same thing with the military. No civilian who slips into a flight suit on Oct. 31 is going to hop into the cockpit of an F-16 and fly to Syria to fight ISIS.

When it comes to dressing up in a military costume, there are some things civilians should consider, just to be courteous. But the fear of veteran retribution shouldn’t deter anyone from dressing up on Halloween as whatever they want.

Civilians should avoid wearing real medals, and real uniforms that belonged to veterans. If you’re going to dress up, try to stick to fake apparel.

But aside from those small details, it’s perfectly acceptable to dress up as a soldier, Marine, airman, or sailor … or a sexy pilot (don’t forget the Ray Ban aviators).

It’s not stolen valor whether you see parents dressing their toddlers in camouflage or a college kid going as drunk zombie Chesty Puller.

So try to restrain yourself on Oct. 31 if you see a guy rocking a 20 medals and a Ranger tab.

But you can call out any military-clad civilian for forgetting a PT belt. Safety first still applies on Halloween.