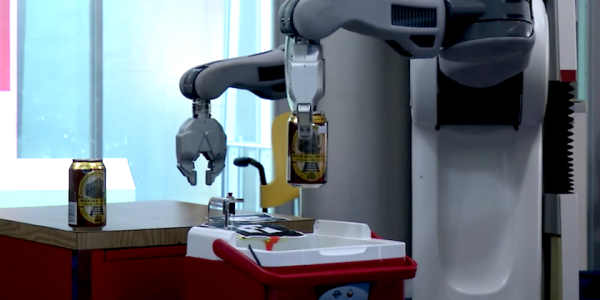 An amendment Flake and fellow Arizona Republican Sen. John McCain submitted to the 2019 Defense Department Appropriations Act would “prohibit the use of funds for the development of beerbots or other robot bartenders.”

Robots have appeared in bars and restaurants in recent years, being used to shake, stir, and garnish drinks — the Makr Shakr robot developed by engineers at MIT was said to be able to mimic a bartender's movements while mixing drinks to precision.

In late 2014, Royal Caribbean agreed to incorporate the Makr Shakr into a “bionic bar” on one of its cruise ships, where they feature a tablet for customers to order drinks and a robotic arm to make them.

“There are beerbots in the private sector already, so why would we devote resources for this?” Flake told Bloomberg Law.

“There's just a lot of willy-nilly spending these days,” Flake said. “Why in the world would you spend Department of Defense funding for beerbots?”

Flake's amendment comes two years after the Defense Department and the National Science Foundation provided $2 million in grants to a project at the Computer Science and Artificial Intelligence Lab at MIT. Those grants were only a part of the total budget.

The project used a double-armed robot to pick up and move beers around, handing them to two other “turtle bots,” equipped with coolers, that acted as waiters. The waiters, which could not communicate with one another unless they were in close proximity, traveled between rooms in an MIT lab, taking orders from people and getting beers from the bartender bot.

The project's goal was “to control a group of robots interacting with an environment in order to cooperatively solve a problem.”

While Flake's amendment would prevent money from going to such studies in the future, it was not clear if future studies could swap alcohol out for something else and still qualify for federal money. Nor is it certain the amendment will be included in the final defense appropriation bill.