There's a video of a Marine officer receiving her first salute from her grandfather currently blowing up on Reddit, and,... 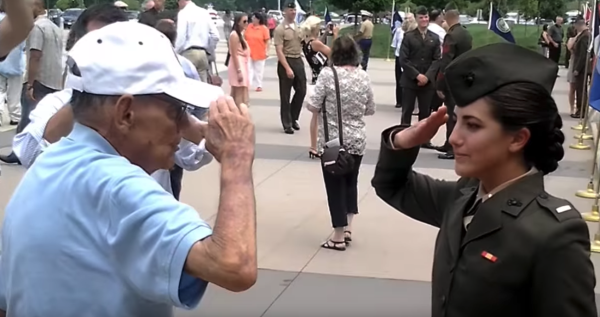 There's a video of a Marine officer receiving her first salute from her grandfather currently blowing up on Reddit, and, well, is someone cutting onions in here?

The video, posted to the MadeMeSmile and military subreddits among others, shows the traditional first salute after an officer is commissioned. After grandpa smartly carries out the salute, he says, “Staff Sgt. Williams, request permission, ma'am, to hug his granddaughter, 2nd Lt. Charlotte Williams.”

“Permission granted,” the lieutenant says, then hugging her grandfather and thus making us all cry tears of joy, to include the guy in the back who tries to play it off like it's no big deal.

Although the video surfaced on Reddit in recent days, it is actually from 2013. The full video was uploaded to YouTube on Aug. 10, 2013, which explained in the description that the grandfather, James Williams, a retired Marine staff sergeant, saluted his granddaughter 2nd Lt. Charlotte Williams at the National Museum of the Marine Corps in Quantico, Virginia.