Will Prince Harry Have To Decide Between His Uniform And Beard?

Maybe we should just call him Prince Hairy? The young royal, who is set to marry a lowly American, Meghan … Continued 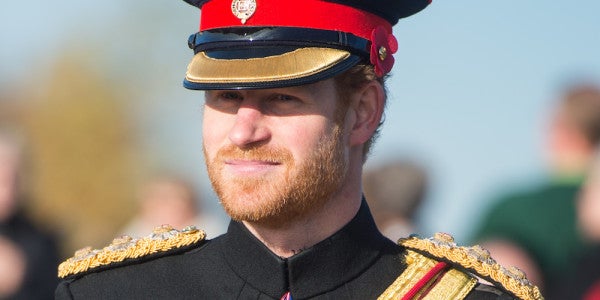 Maybe we should just call him Prince Hairy?

The young royal, who is set to marry a lowly American, Meghan Markle, tomorrow, is known for his ginger scruff, and it looks like this feature is posing a terrible dilemma for the man officially known as Prince Henry of Wales, Knight Commander of the Victorian Order. According to a bombshell report out of the UK, the lad might have to get out the old Gillette Mach 3 Turbo or leave his Royal Horse Guards military uniform in the closet.

UPDATE: Prince Harry wore his beard and his uniform. (To paraphrase Tom Petty, it's good to be prince.)

Harry has served admirably. After graduating from Royal Military Academy Sandhurst, he was commissioned as a second lieutenant in the Army’s Household Cavalry, serving in the Blues and Royals. His unit prepared to deploy to Iraq in 2007, setting off a national debate on whether Harry would be allowed to get some. “There's no way I'm going to put myself through Sandhurst and then sit on my arse back home while my boys are out fighting for their country,” he said.

His chain of command thought better of having a high-value target running around the field of combat — even in the relatively sleepy Maysan Province — so Harry stayed home. A year later, though, he did deploy to Afghanistan as a forward air controller, during which he wound up helping Gurkha troops repel an attack by Taliban fighters.

He later trained as an Apache helicopter pilot, and returned to Afghanistan for a 20-week deployment as a copilot and gunner. Despite the Taliban vowing to “do whatever we can to eliminate him,” the royal scion made it home in one piece.

As a veteran of the British Army, he has every right to wear his dress uniform. And it’s a very smart ensemble. He could also sport the uniform of the Captain General of the Royal Marines, which is also pretty tight.

But doing so with those ruddy bristles of his will raise eyebrows. Just like in the U.S., members of the British armed forces are not allowed to wear beards, with a few exceptions for commandos (because of course), and servicemen with religious obligations or the odd skin condition.

So the question remains: Will Harry shave? Will he go shaggy and just wear civilian attire? Or will he flout the rules (he’s not on active duty, after all) and just do as he pleases? It certainly wouldn’t be the first time the lad was caught in less than appropriate attire. Remember strip billiards?

Esquire, for one, really seems to want him to keep the beard. Bookies in London are giving 5/4 odds that he’ll shave. The whole thing is tragic. When you think about it, there are only two legitimate markers of masculinity left anymore: honorable military service and a lush, unruly thicket of hair adorning the chin and neck.

It seems awfully unsporting, as they say in the British isles, to make the poor boy choose.