Jim Owens, a former Decatur police officer, teaches his students a lot more than how to shoot straight and load... 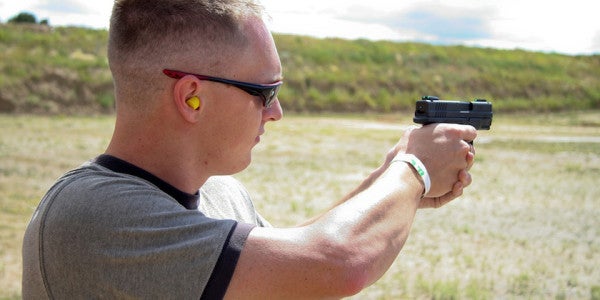 Jim Owens, a former Decatur police officer, teaches his students a lot more than how to shoot straight and load their weapons.

The motto of his concealed carry instruction school is “win the fight,” which translates to surviving an attack and ending a deadly threat.

In a recent session attended by three women and two men, Owens taught them how to quickly reload a handgun while in the middle of a gun battle.

“You need to be carrying another magazine, two magazines at least,” said Owens, who works full-time as an investigator with the Macon County State's Attorney's Office. “You're not going to count rounds in a gun fight.”

He advised his students to prepare for a confrontation by throwing spent shell casings on the ground, to take a mental picture of how many shots they have already fired.

“If I have a 17-round magazine, I've got only three rounds left, what should I do next?” Owens asked during an indoor class session, held at the Warrensburg fire station. “I'm still in the gun fight.”

For the next 20 minutes, he drilled the students in dropping the magazine from their guns while loading full magazines almost simultaneously.

In the third year since concealed carry was enacted into law in Illinois, there are several local businesses that have sprung up to teach basic shooting and safety techniques, as well as other aspects of carrying firearms away from one's residence or business.

Owens partnered with two other men, Zack Wakeland and John Wyatt, to form Resolute Dynamics, a company specializing in instruction for the concealed carry license.

One of the conditions set by the state in order to obtain a concealed carry license is 16 hours of firearms training by an instructor approved by the Illinois State Police. Those who sign up with Resolute Dynamics complete this training in a weekend.

“Our classes are current and relevant,” said Owens, who learned to shoot as a child, but received formalized firearm training while serving in the Army in the 1990s. He was certified as a firearms instructor by the Illinois State Police while working for the Decatur police. While serving as a part-time officer in Warrensburg, he received additional training and certification at the University of Illinois Police Training Institute. “I went through six different training classes this year. We are always trying to keep up on what's relevant, including the law and recent court decisions.”

Related: The 6 Worst Guys You See At The Gun Range »

Training involves scenarios, during which students are put under pressure to perform.

“GUN!” he shouts, signaling for the students to draw their guns from their holsters and point them forward. “Where's your gun pointed?”

At the signal of “SPEED LOAD!” the students are expected to eject the magazines in the gun grips and quickly slide in the fresh ones.

Since Owens started training people shortly after the ink dried on the 2013 Concealed Carry Act, he has trained about 1,400 people to qualify for their licenses and use them responsibly.

In order to qualify on the shooting range, each applicant must shoot a minimum of 10 rounds each at targets five, seven and 10 yards away. The minimum hits of an approved target area is 21 out of 30.

In one of the most recent sessions taught by Owens, all passed, with three out of five hitting 30 out of 30.

“We always teach people to be respectful,” Owens said. “We tell our student not to go into places you're not supposed to. Be respectful of the 'no guns' signs.”

Owens said the demographics of his students during the past few years are about one-third women, mostly between about 28 and 50 years old. There have been some as young as 21. Most of the men are a bit older, mostly in their 50s, but others have ranged between 35 and 60.

“Most are city dwellers, mostly blue collar,” Owens said. “There have been 15 or 20 physicians and eight pastors from Decatur. Their concern is they are preaching and someone comes up and shoots them.”

Bob Squires, a former Decatur police sergeant and Marine Corps veteran, became a firearm instructor 30 years ago, a master instructor a year or so later. He has helped Owens teach a couple of concealed carry classes to civilians in the past, but specializes in teaching classes geared specifically for retired police officers.

“Just about anything that comes up that involves firearms I've done it or am doing it,” said Squires, who has been serving as a court security officer at the Macon County Courts Facility for about 10 years.

Squires said he believes the Illinois concealed carry program is a good one.

“They're doing background checks, to try to keep them out of the hand of the bad guys,” he said.

Tina Shambaugh, 44, of Oakley, recently successfully completed her training with Resolute Dynamics, earning her training certificate on the final day, which she sent in to the State Police to complete her application process.

She said she trained for her license in order to exercise her Second Amendment right to bear arms.

“The conceal carry law tells me we can do that on a regular basis,” she said.

Prior to taking the course, she had little shooting experience, just a bit of going out shooting with friends.

“Yes, I am going to carry,” Shambaugh said, adding that she might not pack a gun all the time. She said she would “absolutely” use her gun to protect someone else. “I would expect the same from them if they were in the same situation.”

A recent hire at the Decatur Fire Department, Brandon Mandernach, said he wanted to be able to protect himself and his family.

“With the recent addition of a little girl, I thought now is the time,” said Mandernach, 34. “You're not always at home. This gives you a little bit of more ability to handle whatever situation presents itself.”

Owens said that when he asks students why they are going through the training, the most common thing he hears is that people are fearful right now.

“With all these shootings by crazy people, there is a real fear they won't be able to defend themselves,” he said. “They say it's my right as a citizen and they'd like to exercise their rights.”

Although the rights of gun owners versus gun control advocates is a hot button issue, Owens said this seldom comes up in class discussions.

“They are more concerned with terrorism rather than someone coming in and taking away their guns,” Owens said. “Some people aren't comfortable with talking about politics publicly. We say we don't let things get political in the class. We focus on mindset and how to use your firearm and the law.

People are more concerned about their physical safety.”

“Our business model is a mobile teaching concept. We will go to your location; we teach at ranges, classrooms,” said Mante, who served in the Air Force in ground security and weapons training earlier in his career. Since leaving the military, he has worked full-time in law enforcement.

His company, Applied Combative Solutions LLC, works in partnership with Accuracy Firearms, a gun shop in Effingham which recently opened a firing range.

Mante teaches about six to eight concealed carry sessions each year, with six to 10 students in each session.

He has seen a broad-based demographic of students, but noticed since last year that more women are applying for his classes.

“We have had a request for women-only concealed carry,” Mante said. “They want an environment with all women, no stress, not a competitive thing.”

Mante is also teaching classes for those who want more than certification for their concealed carry licenses.

“We will train people to effectively defend themselves with a handgun,” Mante said, adding that the combative skill sessions will be limited to five students. “These are one-day classes designed to develop certain skill sets we don't have the time to do with typical conceal carry classes.”