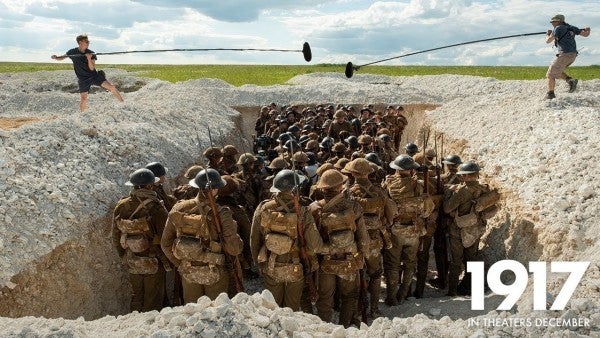 The upcoming drama 1917 intends to drop viewers directly into the trenches of World War I.

To do that, director Sam Mendes and cinematographer Roger Deakins, intend to drag the audience through a single battle in a war that claimed millions of lives more than 100 years ago not as an idle spectator, but as an infantryman on a desperate mission to deliver a message that might save 1,600 British soldiers from a deadly trap — or doom them all, should he fail.

“From the very beginning I felt this movie should be told in real time,” Mendes explains in a Sept. 30 behind-the-scenes trailer. “Every step of the journey, breathing every breath with these men, felt integral and there is no better way to telling this story than with one continuous shot.”

The trailer cuts between finished scenes and production shots, where cameramen race alongside the actors, hop onto jeeps, hoist cameras onto cranes, and rig them to cables for tracking shots so the film never loses sight of the action — and more importantly, the people caught in the middle of it.

“It's meant to make you feel that you are in the trenches with these characters” producer Pippa Harris says in the clip.

“These two young men get sent on a mission to deliver a message to stop an attack,” adds Dean-Charles Chapman, who stars alongside George McKay in the film. “And the camera never ever comes away from the two characters.”