6 smart habits of the US military’s most successful commanders

We need a few good men and women with leadership experience — and what better leadership school than the U.S. military? 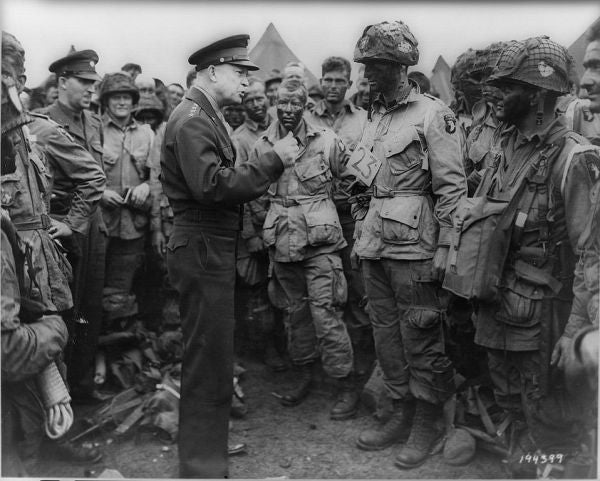 Editor's note: A version of this story first appeared in 2015.

We need a few good men and women with leadership experience — and what better leadership school than the U.S. military? Among the major professions, the military stands alone in that it forces its members to be leaders, granting them ever-mounting responsibility throughout their careers. And with over 5,000 years of recorded military history, there are plenty of leadership lessons to choose from.

Here are six leadership lessons that’ll help you whether you’re on the battlefield or in the board room.

1. A sound mind in a sound body

Campaigning is grueling work — physically, emotionally, and especially physically. For that reason, Napoleon Bonaparte famously said that the most important attribute in a soldier is endurance. That lesson hasn’t been lost on some of America’s greatest commanders, and CEOs as well.

Gen. David Petraeus, who led the war efforts in both Iraq and Afghanistan, may be old enough to receive Social Security benefits, but his workout routine can reduce soldiers a third of his age to tears. “Born to Run” author Christopher McDougall summed up the need for resilient leaders in a profile of the general at The Daily Beast:

If one thing unites the great commanders from Attila to Washington, it has been their raw ability to sleep less, eat less, and drive harder than anyone else on the battlefield. The Duke of Wellington caught some nice breaks at Waterloo, but he also made his luck by spending 10 hours a day in the saddle on a single cup of tea, sleeping two hours a night, and limbering up each morning by walking briskly for 30 minutes while swinging a riding crop.

But while the physical benefits of exercise are obvious, the mental rewards are even even more important: Exercise increases brain activity and reduces stress. Not to mention, that time you spend on the treadmill or pounding pavement is quiet time you can use to prepare for your day.

There are never enough hours in the day, and the higher up you go, the more precious your time becomes. Get ahead of your day by establishing your battle rhythm — the things you absolutely must accomplish each day. Though your personal battle rhythm will undoubtedly include meetings and other briefings, you should also be sure to factor in time for exercise, reflection, and of course, sleep.

Gen. Stanley McChrystal, who commanded U.S. forces in Afghanistan, had a herculean battle rhythm, clearing his head each morning with a vigorous seven-mile run while listening to audiobooks. As McChrystal recounts, he had to set aside time each morning before work to get his exercise in, otherwise he’d quickly find himself hopelessly mired by mundane work.

Think of what’s important for you each day: Is it exercise, reading, or simply finding the time to sleep? Then plot those events on your calendar and guard them relentlessly. In the military, you often find yourself overwhelmed by events. Protect what time you can by setting up your battle rhythm.

(For more on battle rhythm, check out the daily routine of Field Marshal William Slim.)

One of those cynical truths in life is that talent will only get you so far. Whether you’re in uniform or a business suit, you need to build a strong network to help you succeed.

Dwight Eisenhower would have faded into obscurity in today’s Army, having spent nearly 16 years as a major. Worse yet, young Ike almost terminated his career in the early 1920s when he wrote a controversial article in “Infantry Journal” touting tanks as the future of warfare, an anathema at the time. But Ike’s mentor, Maj. Gen. Fox Conner, introduced Ike to another up-and-coming Army officer named George C. Marshall.

The rest is history. At the beginning of World War II, Marshall purged the Pentagon of ineffective officers, sacking nearly three-quarters of his division and corps commanders, and over 150 colonels. Marshall gave Eisenhower — just a full colonel at the beginning of the war — increasing levels of responsibility and within a few short years, he was wearing five stars.

Even the maverick Air Force pilot, John Boyd, whose famous “to be or to do” speech advocated bucking his superiors, had a network. On more than one occasion, a senior officer overruled a bad evaluation from one of Boyd’s first-line supervisors. Boyd also cultivated a network of innovators within the Pentagon bureaucracy, ultimately pushing forward the idea of relatively inexpensive, lightweight fighter jets. The result was the F-16 Fighting Falcon, a staple in most modern air forces.

4. Get the ground truth

Let’s face it, the higher in rank you climb, the less honest people become. Successful leaders know not to trust the sepia-tinted reports in their headquarters, and see things for themselves.

“Jumpin’ Jim” Gavin, who commanded the legendary 82nd Airborne Division during the Second World War was a frequent sight on the battlefield. First out the paratroop door, he was rarely seen in his headquarters. Instead, he was constantly in the field, steel-pot helmet perched atop his head, and an M-1 rifle slung over his shoulder.

Gavin had a “sixth sense” for trouble, and always seemed to appear whenever paratroopers were about to slip up. By viewing these mistakes firsthand, Gavin was often able to make a tangible difference in the lives of his frontline paratroopers.

During Operation Market Garden in Holland, Gavin discovered one of his paratroopers pilfering socks from a Dutch clothesline, in direct violation of Gavin’s order not to loot from civilians.

As Gavin began to dress down the young paratrooper, he discovered that he had simply run out of clean socks since parachuting into Holland. Realizing that there was a breakdown in supply somewhere, Gavin arranged for a supply of socks to be delivered to the young paratrooper.

Still, despite their best efforts, leaders can’t everywhere at once. That’s why many leaders implement what’s known as a “directed telescope” — trusted agents throughout the ranks known for giving candid advice. Former Secretary of Defense Robert Gates used a 21st century version of the directed telescope during his tenure as president of Texas A&M; University, setting up an email account specifically for students to send him observations, complaints, and suggestions. Gates briefly considered continuing the habit when he became secretary of defense, though aides reminded him of the sheer volume of emails he would undoubtedly find himself swamped in.

Adm. James Stavridis, one of the most brilliant officers in recent memory, was both an avid reader and writer. An early adopter of blogs from his time at U.S. Southern Command, his eclectic reading tastes range from Small Wars Journal to Frank Herbert’s “Dune.”

Not only does reading expose you to new ideas, but it improves concentration, helps your writing skills, and best of all, it’s a lot more productive than playing video games.

Most importantly, reading will teach you that there’s very little you’ll live through that someone else hasn’t experienced already. That’s especially true in the profession of arms — after nearly 5,000 years of recorded military history, most armed conflicts differ little from the days of Sun Tzu, Thucydides, and Clausewitz.

As you move up in rank, you’ll find you’re no longer watching over the motor pool or spending sleepless nights on staff duty. Don’t let that privilege go to your head.

On Christmas Day in 1998, a rather unlucky Marine was sitting at a desk in Quantico, Virginia, having been unfortunate to have his number selected for duty that day.

Gen. Charles Krulak, then commandant of the Marine Corps, saw to it to visit each Marine on duty on Christmas. When he arrived at Quantico, however, he couldn’t find the officer on duty. Turning to an enlisted Marine, Krulak inquired as to the identity of the officer.

To Krulak’s surprise, there stood none other than Gen. James Mattis, who had volunteered to serve Christmas duty to allow a married officer to spend time with his family.

A little humility goes a long way with your troops. You don’t need the trappings of rank to remind people you’re in charge. Lead through competence, character, and example.