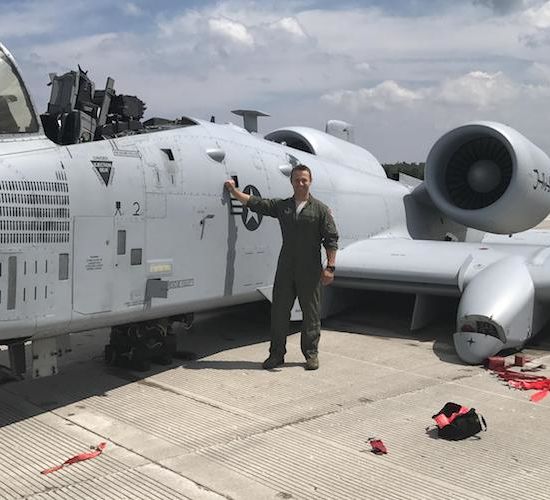 It takes nerves of steel to be a fighter pilot. It takes something else entirely to safely fly a damaged A-10 Thunderbolt II after your canopy has been ripped off and your front landing gear is stuck in the “up” position. And it takes brass f–king balls to glide on in, amidst all that, and stick a wheels-up belly landing as your hair dances in the breeze.

In July 2017, Air Force Maj. Brett DeVries did exactly that — and now, thanks to a new video published by 127th Wing Public Affairs, you can watch the exact moment he pulls off this incredible feat:

The incident took place on July 20, 2017, when DeVries, then a captain with the 107th Fighter Squadron of the Michigan Air National Guard, was on a routine mission at the state’s Grayling Air Gunnery Range.

After firing off a few rounds from his 30mm cannon during a gun run, DeVries’ wingman, Maj. Shannon Vickers, noticed a “donut of gas” blossoming around the cockpit.

DeVries’ main gun had malfunctioned, and moments later the canopy was ripped off, all the while the aircraft was cruising at 325 knots — roughly 374 miles per hour — and just 150 feet off the ground, according to the Air Force’s official account of the incident.

Related: Confessions of an A-10 pilot: What it’s like to fly a cannon with wings

Despite having his head thrown back as the canopy flew off, DeVries immediately regained control of the aircraft and pulled back on the stick to gain some altitude.

“It was like someone sucker punched me,” DeVries later said. “I was just dazed for a moment.”

Over the next several hair-raising minutes, DeVries and Vickers ran through their options and, after testing the landing gear, they found that the front wheel was damaged and was stuck up underneath the 30mm cannon.

One way or the other, they had to put the bird down. There’s was only one thing left to do: DeVries lined up his A-10 for a belly landing.

And as you can clearly see, he pulled it off in superb fashion:

“I flew him down, calling out his altitude,” Vickers said. “He came in flat, I mean it was a very smooth landing.”

For his superb flying that day, DeVries was awarded the Distinguished Flying Cross during a ceremony earlier this month.

“Major DeVries truly put service before self and demonstrated a level of Airmanship to which we should all aspire,” said Brig. Gen. Rolf E. Mammen, the 127th Wing commander, during the ceremony.