Confessions of an A-10 pilot: What it’s like to fly a cannon with wings

Task & Purpose asks an A-10 pilot what it it’s like to fly a cannon with wings; how it feels when it "BRRRRTs"; what unit traditions are unique to Warthog pilots; and of course, we asked about the dumbest thing he did in the cockpit. 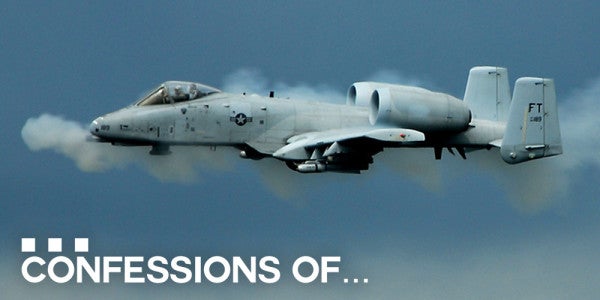 Editor’s note: This article was originally published on Nov. 2, 2018.

Welcome to Confessions Of, a semi-regular series where Task & Purpose’s James Clark solicits hilarious, embarrassing, and revealing stories from troops and vets about their job, billet, or a tour overseas. Are you on an interesting assignment and think you might have something to share? Email james@taskandpurpose.com with your story.

Ahh, the Warthog: A close air support death machine that looks like the energy drink and dip-fueled daydream of a grunt turned aeronautical engineer who decided to make a giant cannon — the GAU-8 Avenger — and then slap some wings on it.

Few aircraft have as die hard a following as the A-10 Thunderbolt II — from those serving overseas in combat zones, to military bases, and on numerousFacebook groups and “Save the A-10” pages. Its fans span the ranks from enlisted to officers, and across all fields. And of course, there are the pilots themselves, like Air Force Maj. Vince Sherer, who spent three combat tours flying Warthogs out of Bagram Airfield in Afghanistan.

“The A-10, most definitely, is like first love,” Sherer, who now spends most of his time in T-38s as a pilot instructor trainer at Randolph Air Force Base in Texas, told Task & Purpose.

“You’re always pining to go back and relive your glory days. I always look back fondly to doing that, but at the same time it’s good to be doing something that’s a little less intense for a little while.”

Given the aircraft’s popularity, Task & Purpose got a hold of Sherer to ask what it’s like to fly a cannon with wings; how it feels when it “BRRRRTs”; what unit traditions are unique to Warthog pilots; and of course, to ask about the dumbest thing he did in the cockpit.

Task & Purpose: In a few words, describe what it’s like to fire the GAU-8 Avenger on a gun run? How’s it feel?

It kind of encompasses all the senses. There’s a massive noise you can hear through your double hearing protection, and through the canopy. There’s massive vibrations; you can feel it. You can see the gun gas; you can smell it. Every bit of your senses are just maxed out when you’re firing the gun, and at the same time you’re watching it lay waste to what you’ve got the gun cross over. It’s just awesome.

T&P: I heard that when an A-10 does a dive and fires its main gun, that the force actually slows the aircraft down a little — is that true, or total bullshit?

VS: That’s a classic A-10 story, man. It’s complete BS. There’s nothing true about it. The origin of that was in early testing. When the gun gas would come out, there was so much gas it would reduce the oxygen content of the air going through the motors to the point it would flame out both motors, and it would compressor stall the motors.

So that verbiage came out to be: When you shoot the gun, it stalls the jet. Which came to be thought of as: the gun’s force slows the airplane down so it stalls. But no, it was gun gas causing the compressor stall, which was the origin of that idea. So they created different shapes on the nose of the jet to route the gun gas so it wouldn’t flame out the engines, so that’s not a factor anymore.

But, the great part about it is we like to tell people at airshows “yeah, yeah, it slows the airplane down so we stall.” We perpetuate that myth.

T&P: What’s the story behind the paint jobs on the nose of some A-10s?

VS: Yeah, nose art as a matter of normal operations in the Air Force was prevalent in World War II. Operations have kind of changed a little bit. It wasn’t acceptable publicly to have scantily clad women painted on the side of the aircraft.

The A-10s specifically, there are some units that have unique designs, to include snake’s teeth, shark teeth, and boar’s teeth, and it’s based on the unit you’re with — those are allowed. But they’re not the same style as a World War II airplane with the name on it.

T&P: Ah, so it’s not so personalized anymore?

VS: No. However, on the inside of the ladder door, there’s door art, so we can hide it away. We close the door and it’s not for public consumption, so as you’re going up, you can see that “this is is the Tasmanian Devil jet,” so you remember the last time you flew it, and the quirks and the ins and outs.

The A-10, I think, is kinda unique with that, where units are allowing guys to do that, but it’s a little more covert.

T&P: What’s the worst ass chewing you ever received?

VS: I do have a great story, but I didn’t necessarily get my ass chewed. But I very well could have.

So for every good fighter pilot story, the 10 percent truth rule applies, and it always starts with “there I was” and the crowd responds “in the shit,” and I go:

I’m flying out of Bagram, just outside of Pakistan and into the Gulf, this is my 2006 return from my first deployment. I’m four hours into an eight hour leg and my Rip-It can is full of dip spit and I already ate my first couple sandwiches and I’m bored as hell, and I decide to give my buddy a holler and say ‘hey check it out.’

Over the past 15 minutes I’d taken off my g-suit, harness, flight suit and everything else.

I tell him to get his camera ready, and he takes a picture of what looks like the south end of an unneutered bulldog smiling for a camera. So there may or may not be a photo of a set of cheeks pressed up against an A-10 canopy.

I got a little finger waving the moment we landed after that one, but it was worth it.