It would be a waste of time to give a biographical rundown of Abraham Lincoln considering the video attached to... 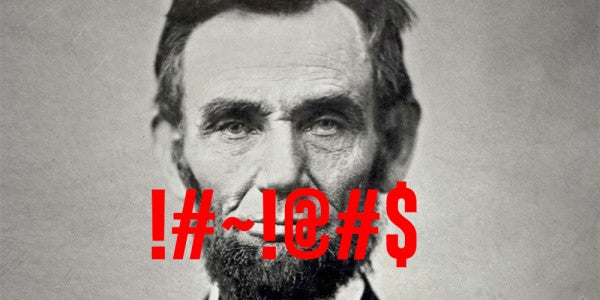 It would be a waste of time to give a biographical rundown of Abraham Lincoln considering the video attached to this story is an filthy recap of his most famous speech, but it's worth getting serious for a second.

There are countless elements of his legacy that consume our collective American mind: his tenure as president during our nation’s most trying time, the emancipation of our slave population, that kickass beard of his, and the Gettysburg Address—a speech that almost every American, young or old, can recognize by the end of the first sentence

A speech of that magnitude could only be born out of dark moments, and the Battle of Gettysburg—which had occurred shortly before the speech was given—was the perfect mixture of unequaled horror and a glimpse of hope. Though the Union Army had technological and numerical advantages at the outset of the war, the Confederate Army had been benefiting from superior military leadership and a will for victory that was hard to match.

The Union Army’s undeniable victory at Gettysburg was the perfect moment for Lincoln to rally the United States with his exceptional oratory skills. And that’s exactly what he did.

That speech is only considered great in the annals of American history because it was so perfectly delivered at the right place and right time. His legacy as a leader was sealed at that moment, but his immortality in the public’s consciousness was sealed in April of 1865 when an assassin took his life just five days after his dream of American reunification was achieved.