"I would buy a print of this!" 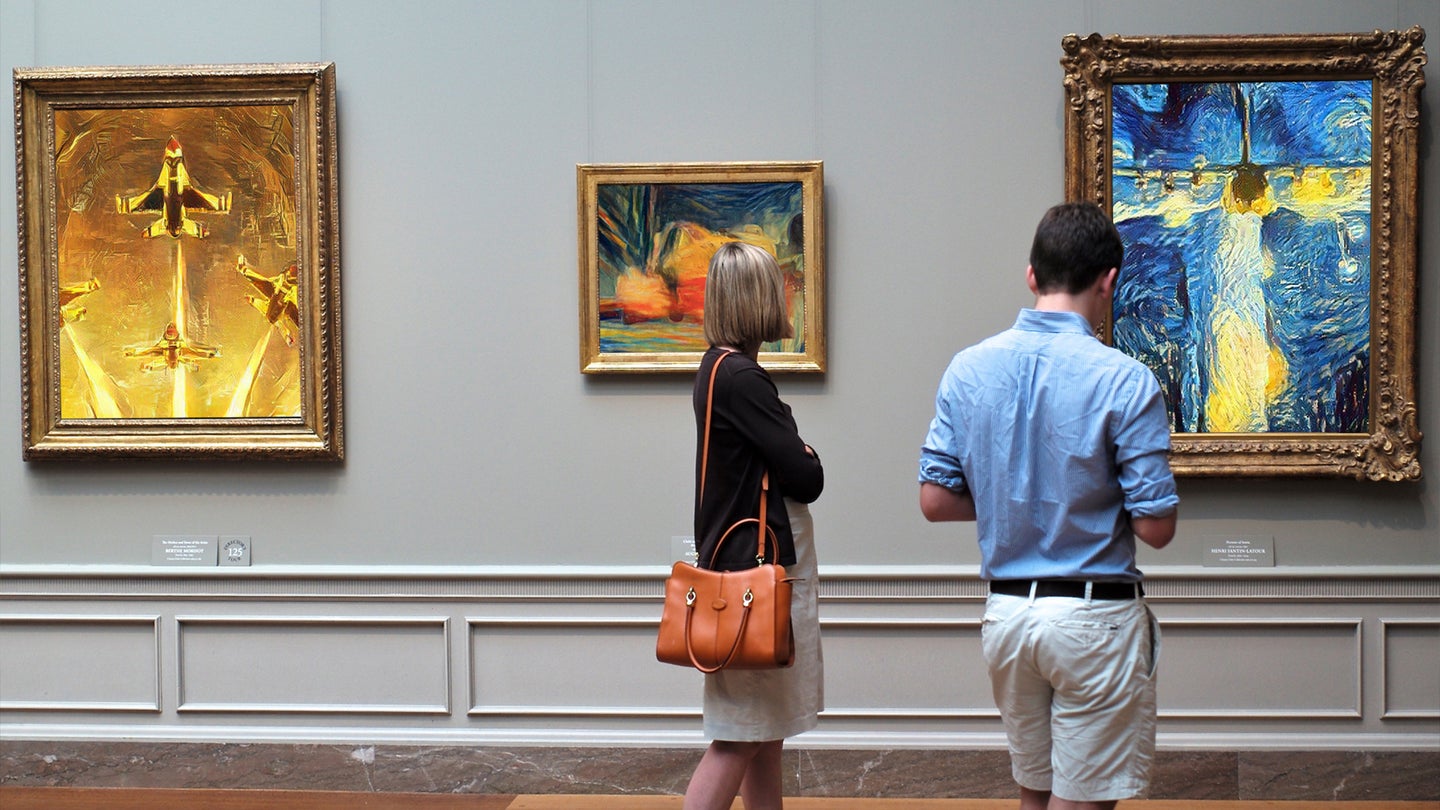 The Air Force likes to think that its aircraft are state-of-the-art, but has anyone considered that they are also the art of the state? At least, that’s what I would title the art gallery which sprung out of the well of creativity and insight known as the Air Force subreddit over the past day or so.

If you take a gander at the page, you can see paintings of two legendary Air Force aircraft: the C-130 Hercules cargo plane and the A-10 Thunderbolt II attack plane, rendered in the style of 19th-century European masters Vincent van Gogh and Edvard Munch. But unlike their paintings, which took decades of practice and a pinch of genius to create, these works of aircraft art were made in a few minutes by a computer algorithm.

“Used NightCafe to create this,” wrote Reddit user pkragthorpe when they posted their first painting: C-130 Angel Starry Night on Wednesday. “Hope you like it!”

The painting shows a C-130 dropping flares through the oil-on-canvas sky in a style much like the legendary painting “The Starry Night,” which Van Gogh created in June 1889 while looking out his asylum room window in southern France shortly after cutting off his left ear. Creating the C-130 version seems much less painful. According to its website, Night Cafe is an artificial intelligence art generator app that can re-imagine user images in the style of a famous artist such as Van Gogh, Picasso, Matisse, Hokusai, Lichtenstein, Dalí or anyone else you made a presentation about in high school art class.

When asked what motivated him to use Night Cafe, pkragthorpe, whose real name is Paul Kragthorpe, said his inspiration “comes from being an Air Force veteran,” he told Task & Purpose. He served from 2000 to 2008, the last four years of which were as a flight engineer aboard a C-130 with the “Flying Vikings” of the 96th Airlift Squadron based at Minneapolis-St. Paul Air Reserve Station, Minnesota.

“Hands down my best days of being in the Air Force. Love that plane!” he said. “And I see it everyday as I have used it to decorate my home office.”

Kragthorpe wasn’t limited to Hercs though. His second-favorite plane is the A-10. Though he never got a chance to fly one, he “always loved watching it and listening to the engines on that one,” he said.

“Since the first time I saw it at an air show during my tech school at Keesler AFB back in 2000, I was hooked on that thing,” Kragthorpe added. “Wish I had gotten a degree and gotten commissioned and been able to fly one of those. That would have been just the coolest thing.”

Shortly after his first post, Kragthorpe made a painting of an A-10 ‘Warthog’ in the frantic style of Edvard Munch’s famous work “The Scream.” It’s a fascinating choice for several reasons. “The Scream,” according to Smithsonian Magazine “defined how we see our own age — wracked with anxiety and uncertainty.” Likewise, “anxiety and uncertainty,” is probably the reaction many an unfortunate enemy fighter has felt upon seeing a Warthog bearing down on them. The reaction may also be afflicting the A-10 community itself, because the Air Force at large has been trying to ground the aircraft for decades.

The blood red and orange hues of “The Scream” also lend themselves to the fire-spitting dragon image that the Warthog must evoke when it opens up with its 30mm GAU-8 Avenger cannon. As one Reddit commenter wrote: “I can hear this in my bones.”

When asked what guides his choice of artistic styles, Kragthorpe was modest.

“Honestly my choice for choosing those styles was just like ‘I bet this would look cool,’” the auteur said. “I’m not an artist or anything, just messing around with the cool AI tool!”

For fans of more contemporary artists, Kragthorpe also made a painting of the Air Force Thunderbirds F-16 demonstration team in the style of the American digital artist Beeple’s “Bitcoin Goddess.” I can’t even begin to unpack the subtle themes of commodification, internet capitalism and military industry packed into that one, but it sure looks cool, and I’m not the only fan of the paintings.

“That’s amazing,” wrote another. “I would buy a print of this!”

So there you have it: anyone can partake in the fine arts when you put a sweet zoomy zoom plane in it. Bravo!