Cold dark places, mysterious enemies ... what are we waiting for? 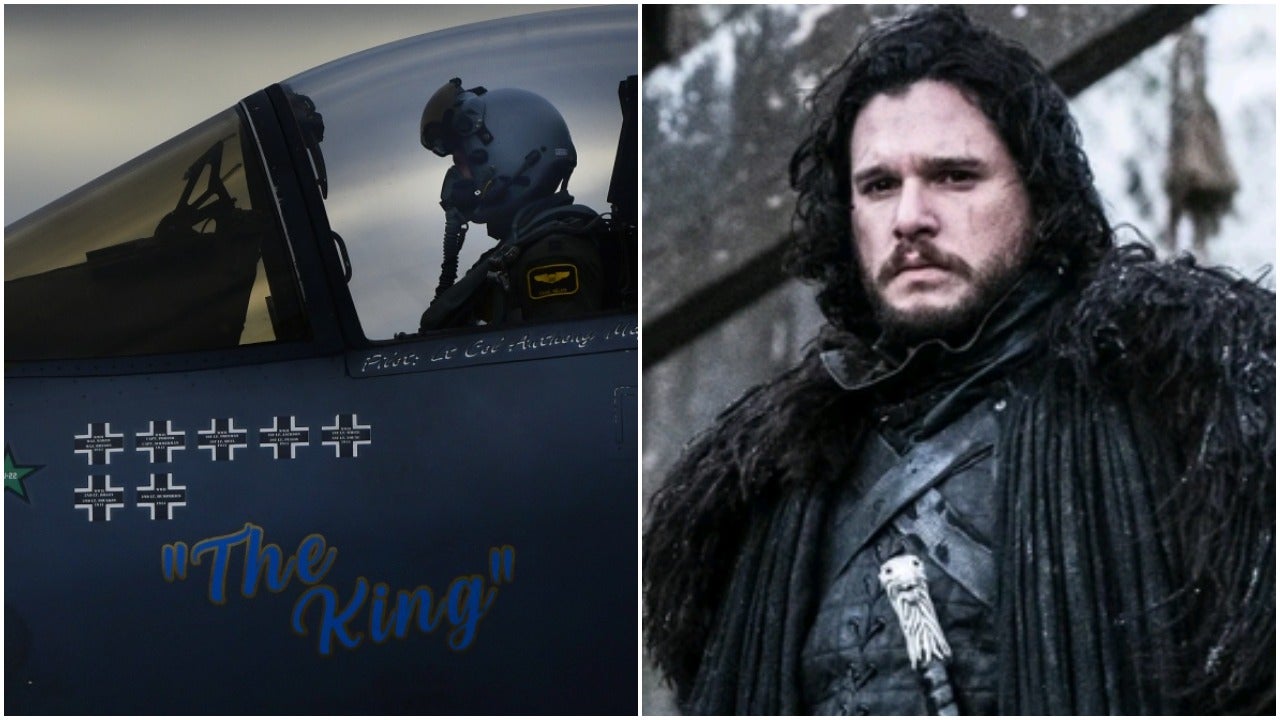 The fantasy TV show Game of Thrones may have ended last year, but beware: winter is still coming.

Luckily for us, the Air Force has a fighter squadron that bears a striking resemblance to the Night’s Watch, the TV show’s motley band of Wildling hunters and ice zombie fighters.

What do the 493rd Expeditionary Fighter Squadron and the Night’s Watch have in common? Quite a lot actually: their mission, location, leaders, adversaries, and their grim choice of mascots are surprisingly similar.

Both the Night’s Watch and elements of the 493rd patrol the cold, dark reaches of the far north to protect those farther south from mysterious, deadly forces. Sure, the Night’s Watch makes do with swords and spears, while the Grim Reapers of the 493rd fly Mach 2-capable F-15C Eagles equipped with air-to-air missiles, but it’s the same job, right?

OK, so I mentioned the cold, dark reaches of the far north, and here’s why: the Night’s Watch patrols the frozen forests and tundra of the North, while airmen from the 493rd conduct “air policing” missions out of Iceland, one of the northernmost human settlements on the planet.

NATO describes air policing missions as “the 24/7 presence of fighter aircraft, which are ready to react quickly to airspace violations,” which is basically the same as fighting a roaring giant in an ice tunnel, in my opinion.

Another note on location: Iceland happens to be the same place where many of the Night’s Watch scenes in Game of Thrones were shot. That means technically the 493rd and the Brothers in black patrol the same exact ground, though one by air and one by foot and horseback.

Both the 493rd and the Night’s Watch also inhabit a wall … of sorts. The Brothers in black saunter up and down an actual 700-foot-high wall of ice that has a great view of the North on a clear day. Iceland, meanwhile, has “strategic remote radar and communication sites, providing 24/7/365 air surveillance for continued Allied operations in the Arctic,” the Air Force wrote in a press release.

Both the 493rd and the Night’s Watch follow a ‘King’ in the North. In the Night’s Watch, that King is Jon Snow, a.k.a. Aegon Targaryen, a high-born lad who rises through the ranks of the Watch and eventually becomes King of the North.

Meanwhile, in the 493rd, the ‘King’ is a fighter jet affectionately named after Lt. Col Royal ‘King’ Baker, an accomplished World War II fighter pilot who became commander of the 493rd in November 1943.

Baker shot down three enemy aircraft, as well as one shared destruction and one probable, during his 272 combat missions in WWII, according to the Air Force. He was also awarded the Silver Star for gallantry in action and a Distinguished Flying Cross with an oak leaf cluster. Kind of like Jon Snow as an aviator.

Seventy-six years later, Baker’s legacy takes the form of ‘King,’ the 493rd’s F-15C Eagle painted with ice blue tails and black-and-white Allied invasion stripes running down the aircraft’s wings. Those are threads fit for a king, if I do say so myself.

“It’s a source of legacy and pride for both the operations staff and our maintainers,” said Lt Col Mark Perry, the 493rd’s director of operations, in a press release. “This jet symbolizes the Reapers, and we wear that as a badge of honor.”

The 493rd doesn’t actually take orders from the jet of course, but it is still a ‘King’ in the North.

The original purpose of the Night’s Watch was to patrol the snow and ice for undead White Walkers hellbent on turning the people of Westeros into ice zombies. The 493rd’s mission is a bit more abstract but very similar in some aspects.

As melting sea ice opens new trade routes through the Arctic, and as a second Cold War emerges between the U.S. and Russia, U.S. commanders are bracing for a fight in the far North.

In response, Russian aircraft make headlines all the time for violating somebody’s airspace as they probe NATO air defenses. That doesn’t sound as bad as ice zombies, but the Air Force still considers the incursions a serious threat and is ramping up its air policing missions accordingly.

But the real similarities between the enemies of the 493rd and the Night’s Watch lie in their leaders: some say that Russian President Vladimir Putin bears a resemblance to the Night King, the leader of the White Walkers in Game of Thrones. Putin even shares a first name with the actor who plays the Night King, Vladimir Furdik. Coincidence? I think not!

The 493rd has a similarly dreary mascot: the Grim Reaper. But that’s not all: since 2003, the unit emblem has been a skull with the words Mors Inimicis, or “Death to the Enemy,” written above it.

There you have it: a cold north, a cunning enemy, a proud ‘King’ and a fascination with death seem to unite the sword-wielding Night’s Watch with a cutting-edge Air Force fighter squadron. Mors Inimicis, for this night and all the nights to come!