‘A Badge Of Honor’: Retired US General’s Face Used For Target Practice By Russian Students

The Russians do not like Robert Scales one bit, and that's not just in the halls of the Kremlin. According … Continued 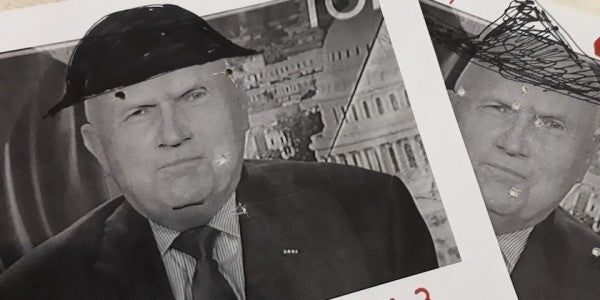 The Russians do not like Robert Scales one bit, and that's not just in the halls of the Kremlin.

According to the Moscow Times, Russian students participating in a charity-sponsored “air rifle shooting competition” in the country's Urals region were invited to take aim at a photo of the retired U.S. Army major general instead of the conventional rifle target.

From the Moscow Times:

The shooting competition in Russia’s fourth-largest city of Yekaterinburg was organized by a local youth charity called “Assistance for Street Children.”

Its head, Bek Manasov, told local media that the foundation’s staff invited the children to shoot at a portrait of Scales at the conclusion of the competition.

“We used a photograph of Robert Scales because he is our enemy and we are working to promote patriotic education,” Manasov said, adding that he wanted Russian children to know that “Russia doesn’t only have friends, but also a lot of enemies.”

According to Manasov, about a hundred teenagers aged 13 to 18 participated in the competition.

When reached comment by Task & Purpose, Scales seemed nonplussed by the development.

“I'm just another victim of the Kremlin s information war strategy,” Scales told Task & Purpose in an email. “I wear it as a badge of honor.”

“For sure, there will be no more moonlit walks on the Neva for Diana and me,” he added.

Currently a member of the Pentagon’s close combat lethality task force, Scales kicked up a bit of a firestorm back in 2015 when he proposed a kinetic solution to the Russian military's annexation of Ukraine's Crimea region the previous year.

“The only way the United States can have any effect in this region and turn the tide,” Scales said during an appearance on the Fox Business Network, “is to start killing Russians … killing so many Russians that even Putin’s media can’t hide the fact that Russians are returning to the motherland in body bags.

“My point was that most Russian revolts came from Russian misadventures abroad,” Scales told Task & Purpose of the soundbite. “Russian mothers will sacrifice their sons to defend Mother Russia, but not so much abroad. The Russo-Japanese War, World War II, and more recently Afghanistan all led to revolution. Toppling Putin will only occur with another failed foreign adventure.”

As the Observer noted, Scales' remarks were cat-nip for the Kremlin's propaganda, which kicked into high gear and “made an anti-celebrity” out of Scales. Now, three years later, that image has apparently persisted. Perhaps avoiding those moonlit walks on the Neva isn't the worst idea after all.

gen. robert scales
How The Other Half Fights
mandatory fun
news
Russia