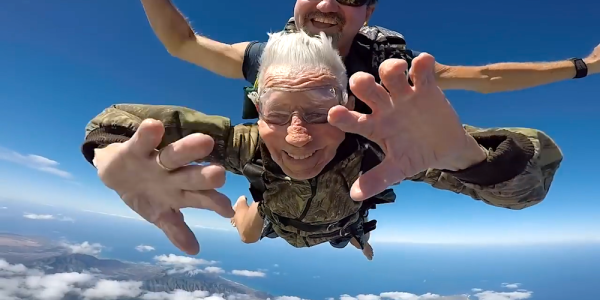 The last time former Army paratrooper Polito “Paul” Olivas jumped out of a perfectly good plane, Lyndon B. Johnson was president, the average cost of a new car was $3,500, and the Beatles released their first album in the United States.

For his 100th birthday, he figured he’d give parachuting another go.

The very spry Mililani resident became a centenarian on Aug. 22, and on Wednesday morning, he jumped out of another perfectly good plane at 14,000 feet while tethered to Skydive Hawaii instructor Richard Doppelmayer. The jump had originally been scheduled for Aug. 26, but was postponed due to the approach of Hurricane Lane.

For Olivas, who jumped into Normandy on D-Day in 1944 with the 101st Airborne Division as German spotlights and bullets pierced the night sky, this time was just pure thrill.

“Excellent,” the retired Army master sergeant said of his approximately one-minute freefall and six-minute canopy ride after Doppelmayer glided the pair to a stop at Dillingham Airfield. “Let’s do it again.”

And he just might — for his 101st birthday, which he’s already pledged to do.

Even at 100, Olivas doesn’t use glasses or a hearing aid, friends say. Before the jump, the 5-foot-2, 120-pound Olivas said he was ready.

The post-birthday jump capped a celebration of Olivas’ remarkable life so far, which was an adventure even before he jumped out of a low-flying C-47 airplane loaded down with a rucksack, parachute and M1 Garand rifle 74 years ago.

“Nothing much there except rattlesnakes and prairie dogs,” he recently recalled. “It was cowboy country in New Mexico — way out in the sticks.”

During his younger years, Olivas lived with his brothers, parents and grandparents in a small cabin with a dirt floor and no running water or electricity.

Later in life he became one of the original members of Army Special Forces, severely fractured an ankle in a training jump in South Korea just before the armistice was signed in 1953, and served multiple times with Gen. William Westmoreland, who commanded U.S. forces in Vietnam from 1964 to 1968.

Olivas is widely known for restoring classic Mustangs and is a founder of the Aloha Mustang and Shelby Club of Hawaii. He still drives a fire-engine red 1964-1/2 Mustang.

“He gets up every day and works hard. He’s an inspiration to the people around him (and) he doesn’t let things get him down,” said friend and former neighbor Maj. Kevin Boyd, a public affairs officer for Special Operations Command Pacific. “He positively leaves his mark with everyone around him.”

That, despite losing his wife of nearly 56 years, Magdalena, in May.

Asked recently about the secret to his longevity, Olivas jokingly responded, “Bud Light!”

He said it’s like standing in the door of an airplane as a paratrooper, waiting to jump.

“And you jump. Positive attitude. Do it.”

Some people say they’re too old, Olivas said. “Their foot starts (to hurt), and, ‘Yeah, you’re kind of old. Well, sit down, take to your rocking chair. Don’t do that today.’”

By contrast, Olivas said, “I get up in the morning; I’m going to do it.”

“If people came late, and we ran out of food, we had MREs (military meals ready to eat) on standby,” said friend and former Special Forces soldier Roy Ogasawara, who jumped with Olivas.

Neighbors Boxley Diggs and his wife, Ellen, were among well-wishers who came out for the jump.

“He’s been wanting to do this for some time, but his wife, when she was still living, wasn’t too fond of the idea,” Boxley Diggs said. “So he held off at her request.”

Wednesday’s jump was the first free fall for Olivas, who was accustomed to his chutes opening automatically on the end of an 85-foot static line.

The rush of wind was “stronger than I thought it was going to be,” he said. “But it was quite a ride.”

From a start of 14,000 feet, “everything is so small. The houses are so small. The cars are small. I saw the ocean over there, and coming in was so pretty. I could see the landing zone,” he said.

Retired Marine Corps Col. John Bates, who also jumped with Olivas, said the oldest person to skydive was 102. Bates said he wants to participate in Olivas’ 103rd birthday jump to break the record.

“I better do it,” Olivas said. “I better stay healthy. Keep drinking my Bud Light.”