For one lucky battalion of American soldiers stationed in Germany, Christmas came more than once this year. On Dec. 26, … Continued 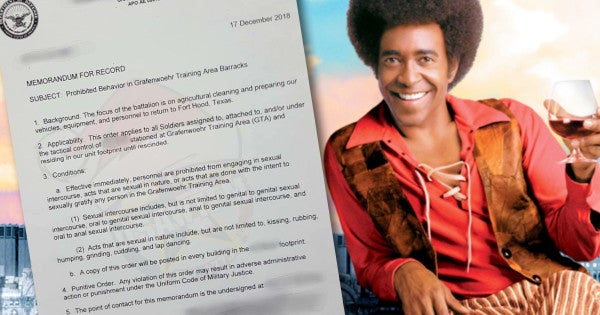 For one lucky battalion of American soldiers stationed in Germany, Christmas came more than once this year.

Those behaviors also include “acts that are done with the intent to sexually gratify any person” and “acts that are sexual in nature,” including “kissing, rubbing, humping, grinding, cuddling, and lap dancing.”

When reached for comment by Task & Purpose, officials could not clarify whether these behaviors included the OTPHJ.

It's unclear what, if any, specific incident precipitated this week-long prohibition on ass-eating, but soldiers from the battalion “have been living in close proximity while deployed to Europe for nine months,” Army officials told Stars & Stripes.

“The intent of the policy letter was to ensure Soldiers remained professional and respectful of one another while they work and live in close, public quarters, like the barracks that house multiple Soldiers in an open bay,” Army spokeswoman Maj. Bonnie Conard told Stars & Stripes.

Given the preponderance of mistletoe in Grafenwoehr's host nation of Germany, such a prohibition seems extraneously punitive. Luckily, Army officials reached the same conclusion just over a week after issuing the initial guidance.

It's a Christmas miracle, y'all.