On the battlefield, snipers often find themselves isolated from the rest of the force for days at a time, if not longer 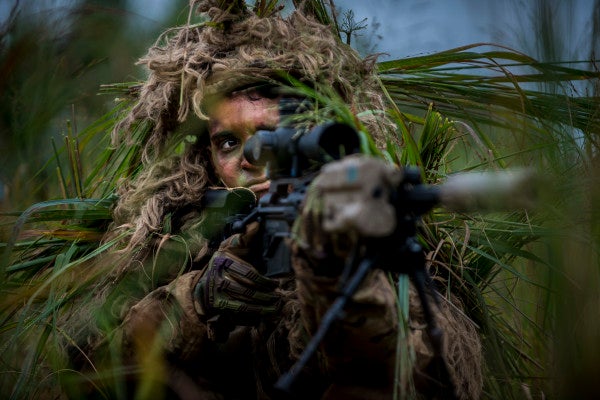 On the battlefield, snipers often find themselves isolated from the rest of the force for days at a time, if not longer.

With people around the world stuck at home in response to the serious coronavirus outbreak, Insider asked a U.S. Army sniper how he handles isolation and boredom when he finds himself stuck somewhere he doesn't want to be.

Obviously, being a sniper is harder than hanging out at home, but some of the tricks he uses in the field may be helpful if you are are starting to lose your mind.

As a sniper, “you're the eyes and ears for the battalion commander,” 1st Sgt. Kevin Sipes, a veteran sniper from Texas, told Insider, adding, “There's always something to look at and watch.”

He said that while he might not be “looking through a scope the whole time, looking for a specific person,” he is still intently watching roads, vehicles, buildings and people.

“There are a lot of things that you're trying to think about” to “describe to someone as intricately as you possibly can” the things they need to know, he said. “Have I seen that person before? Can I blow a hole in that wall? How much explosives would that take?”

There is always work that needs to be done.

2. Break down the problem

One trick he uses when he is in a challenging situation, be it lying in a hole he dug or sitting in a building somewhere surveilling an adversary, is to just focus on getting from one meal to the next, looking at things in hours, rather than days or weeks.

“Getting from one meal to the next is a way to break down the problem and just manage it and be in the moment and not worry about the entirety of it,” said Sipes, a seasoned sniper with roughly 15 years of experience who spoke to Insider while he was at home with his family.

3. Work to improve your position

“You're always trying to better your position,” Sipes told Insider. That can mean a number of different things, such as improving your cover, looking for ways to make yourself a little more comfortable, or even working on your weapon.

“What is going on in your own little environment that you've never noticed before?” Sipes asked.

Thinking back to times stuck in a room or a hole, he said, “There is activity going on, whether it's the bugs that are crawling across the floor or the mouse that's coming out of the wall.”

“You get involved in their routine,” he added.

5. Look for new ways to connect with people

In the field, snipers are usually accompanied by a spotter, so they are not completely alone. But they may not be able to talk and engage one another as they normally would, so they have to get a little creative.

“We spend a lot of time doing sector sketches, panoramic drawings of the environment. We always put different objects or like draw little faces or something in there. And, you always try and find where they were in someone's drawing.”

He added that they would also write notes about what was going on, pass information on things to look out for, and even write jokes to one another.

6. Think about things you will do when its over

“One big thing I used to do was list what kind of food I was going to eat when I get back, like listing it out in detail of like every ingredient that I wanted in it and what I thought it was going to taste like,” Sipes said. He added that sometimes he listed people he missed that he wanted to talk to when he got back.

7. Remember it is not all about you

Sipes said that no matter what, “you are still a member of a team” and you have to get into a “we versus me” mindset. There are certain things that have to be done that, even if they are difficult, for something bigger than an individual.

He said that you have to get it in your head that if you don't do what you are supposed to do, you are going to get someone else killed. “Nine times out of 10, the person doing the wrong thing isn't the one that suffers for it. It is generally someone else.”