The Army may name its next missile-hauling Stryker after a fictional Warhammer 40,000 tank

Buckle up, fellow nerds, because the U.S. Army is about to blow all its points on a goddamned Manticore 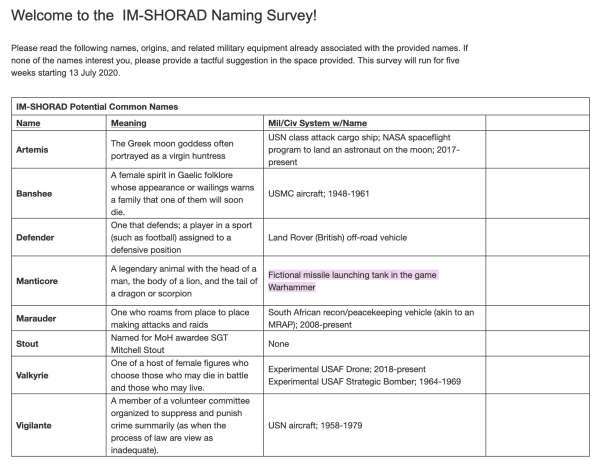 Buckle up, fellow nerds, because the U.S. Army is about to blow all its points on a goddamned Manticore.

Well, sort of. As part of it's push to develop a Initial Maneuver Short-Range Air Defense (IM-SHORAD) Stryker vehicle laden with drone-killing missiles, the Army's Air Defense Artillery School at Fort Sill, Oklahoma, is soliciting the help of its fans to actually name the beastly new Stryker variant:

Now, before you get all excited and insist on recommending 'Stryker McStrykerface,' the ADAS is primarily offering up a set list of options for enthusiasts to choose from. And those names are pretty sweet, including the likes of Banshee and Vigilante in tributes to the Marine Corps and Navy aircraft of the same names, respectively.

Yes, you're reading that correctly: With your help, the Army's next major Stryker variant could be named after a fictional missile hauler from the popular Warhammer 40,000 franchise. You know, this thing:

Although there are clearly major differences between the IM-SHORAD Stryker, which is basically a troop carrier rigged with extra firepower, and the Manticore which is a fictional piece of self-propelled rocket artillery, the name may just be appropriate.

Indeed, the Leonardo DRS mission equipment package mounted atop the Stryker, which features an Avenger air defense turret laden with both Stinger and AGM-114 Longbow Hellfire missiles, sort of resembles the Manticore missile turret if you squint just right, no?

Regardless, 'Manticore' is a dope name taken from a dope creature of myth, and you can absolutely make it a reality by taking the Army's survey here. Go now, and vote — it's your duty to the Imperium.