Marching is an everyday occurrence at Fort Gordon. But war-ready soldiers are usually not chanting along to a popular children's song 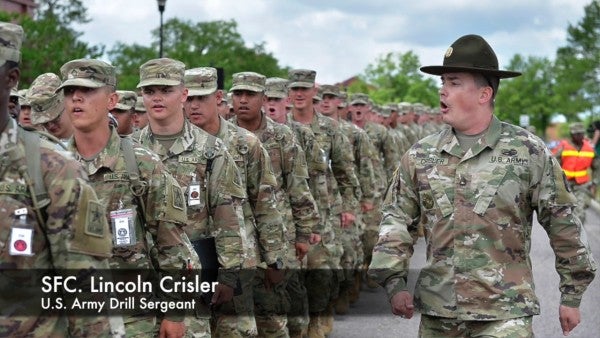 Marching is an everyday occurrence at Fort Gordon. But war-ready soldiers are usually not chanting along to a popular children's song.

Sgt. 1st Class Lincoln Crisler has been in the Army for 18 years. He's participated in countless marches, and tries to switch up the tune of his cadences. He thought marching his soldiers to the tune of “Baby Shark” would be fun, so he asked a soldier to record it. Then he uploaded the video to social media. He didn't expect the viral sensation it would become.

Crisler first posted footage on his Facebook page of the 551st Signal Battalion marching to “Baby Shark” in April. That video now has more than four million views and 82,000 shares, which have contributed to millions more views.

The drill sergeant often changes up the cadence of the marches, but this is the first time his tune made the soldiers break routine to dance along. He said he tries to keep his cadences fresh and not repeat them too much.

“I was like, let's do something kind of cool while still marching them that still keeps them in step and people wouldn't expect it,” Crisler said.

Crisler said the song follows the same 2/4 time as other march cadences, and helped keep the soldiers in step.

The marches are typically used as a team building exercise to keep the soldiers in one cohesive unit and bond them. Pvt. 2nd Class Parker Wallace, from Sandersville, Ga., said the different cadences are a break in the repetition of the day.

Wallace said soldiers are supposed to keep their hands at their sides while marching, but when the drill sergeant began chanting “Baby Shark,” he saw some laughing and making the hand motions that accompany the tune.

“It's hard to keep a straight face but after a few times of us doing it we kind of got used to it,” Wallace said. “He always has his unique cadences and they really bring everybody together, so we all got right on board.”

Wallace, like Crisler, didn't expect the reaction the video received.

“I started recording and the next thing I know I saw it a couple of days later and it was viral,” Wallace said. “It was crazy because I never thought I would ever experience anything like that in my life.”

Pvt. 2nd Class Dylan Bazzy knows the song from his 4-year-old brother. When he heard the sergeant chanting “Baby Shark,” he laughed. He said fun songs help the soldiers unwind.

“It is a breath of fresh air and it relaxes you, it takes the pressure off you,” Bazzy said.

For his next act, Crisler might take inspiration from a video he saw on YouTube that featured Marines marching to Taylor Swift. But no matter the cadence, Crisler plans to keep the soldiers on their toes.

SEE ALSO: All The Ways Drill Sergeants Call Cadence In One Video