The Nerf arsenal your squad needs to dominate the playground

It’s natural to want one’s squad outfitted in the latest and greatest in low-impact fun-guns. 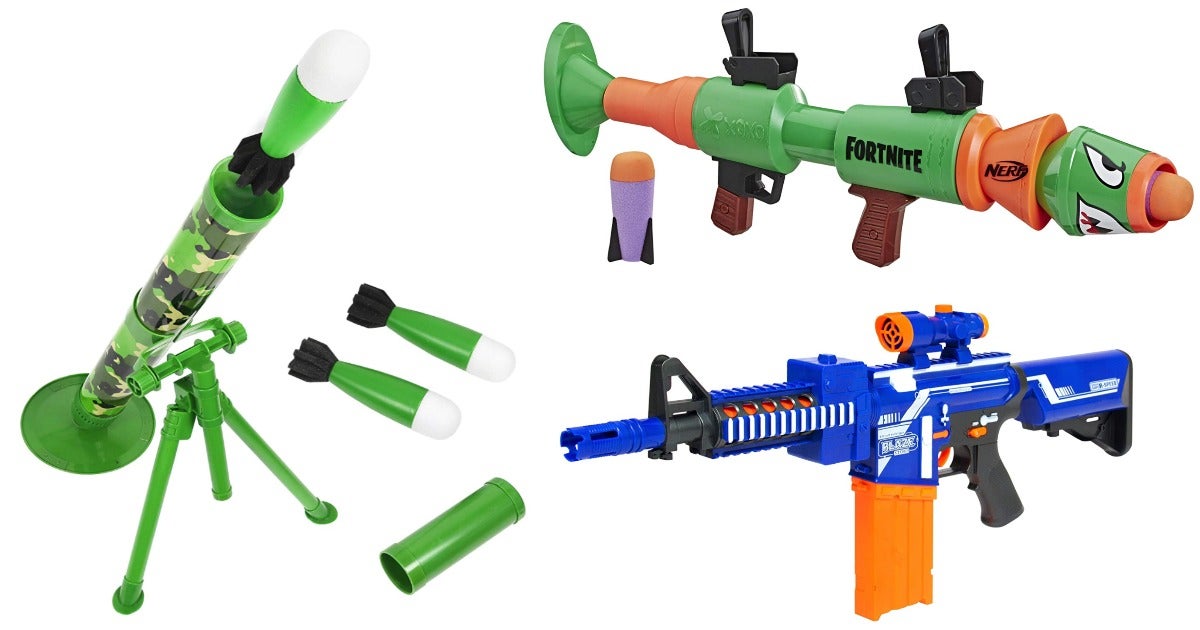 Whether it’s defending one’s home from soft-bodied pedestrians or invading some godforsaken sandbox down the block, Nerf guns are an important fixture of every good homeowner’s arsenal. Not only are they fun as hell, but they’re extremely diverse and adaptable — and, at times, a bit too close to home for those who specialize in handling weapons. As a result, it’s natural to want one’s squad outfitted in the latest and greatest in low-impact fun-guns, especially if you’re bracing for a middle-of-the-night mission deploying from the bedroom to the living room.

Oh, did we mention they’re fun as hell? I thought so.

The standard rifleman has to be ready for anything, and what better tool to meet whatever carnage awaits than what appears to be a loving replica of the tried-and-true M4 carbine? This rapid-fire dart blaster comes with a clip of 20 darts and a monocular sight — just be sure not to lose it or you’ll incur a significant amount of paperwork.

For your squad leader

If you’re leading a squad of Nerfed-out warfighters into the battle of a lifetime, why settle for anything less than the best equipment? The Nerf Elite 2-in-1 Demolisher doesn’t just feature rapid-fire action from a motorized bottom-fed clip, but an extremely classy underbarrel launcher for sticky situations. Grab one today and lead your squad on to glory!

For your squad designated marksman

When you need to engage enemies at relatively extreme ranges, don’t forget to outfit the best long-distance shot in your unit with equipment that matters. The Nerf Ultra Pharoah blaster is a bolt-action beauty designed to deliver a clip of 10 darts at distances of up to 120 feet with remarkable precision — that is, for a toy. Pick one up if you want to wreak havoc on enemy formations.

A Nerf/Fortnite mashup, the BASR-R Bolt Action blaster should be reserved for the absolute best marksman in your crew. With a modular scope and six-dart clip, it’s a rifle reserved for the most precise of shots — and it even comes with little targets to practice with. Sow fear in the enemy from long distances with this sassy little biscuit at your leisure.

OK, so this isn’t precisely a classic Nerf system, but the TeganPlay mortar launcher might be the best way to rain warheads on foreheads from afar on a spread-out battlefield, even if they don’t explode on impact. Then again, who cares: it’s a great excuse to shout “shake ‘n’ bake!” as you force your foes to take cover behind the slides.

Now, is it really a grenade launcher if the grenades don’t actually explode? Here’s an answer to that silly question: shut up, nerd. Sure, this doesn’t carry the delightful demolition power that an M320 or M203 might, but it’s certainly likely to surprise your underpowered foes when you roll up on the playground with a friggin’ grenade launcher. Boom goes the dynamite!

This bullpup style shitkicker is more flashy than functional and certainly not based on any standard design that I’ve ever seen, but hey: that’s why they call ‘em ‘specialists,’ amirite? This bad boy fires five darts a second with a 25-dart drum, certainly enough to lay down some suppressive fire as you’re struggling to take that last inch of the godforsaken sandbox you’ve decided to invade.

Another Fortnite combination, this too does not explode when fired, but it’s still awesome as all hell. This bad boy comes with two Nerf rockets, so you know it’s legit; what it lacks in range, it makes up for in laughable surprise factor.

It seems that close-quarters breaching weapons might not make sense as the basis for a Nerf gun, but in the case of this Nerf Rival pump-action shotgun it absolutely works. This eight-round beastie may not pack the same punch as a Mossberg, but it certainly comes with the appropriate intimidation factor. Overchewed cigar not included.

No matter how well kitted-out your rambunctious squad of Nerf-slingers happens to be, everyone needs a sidearm in case things get especially dire. Consider the Nerf Ultra Five four-dart blaster as your weapon of last resort.

For your very own Master Chief

Is that a rapid-fire assault rifle from the Halo franchise? Yes, yes it is. Any more questions?

Related: If you don’t have one of these 7 tomahawks, do you even ‘Merica?