These badass military photos were completely ruined by BFAs

There's one surefire way to ruin an epic "thank me for my service" photo, and that's a BFA. 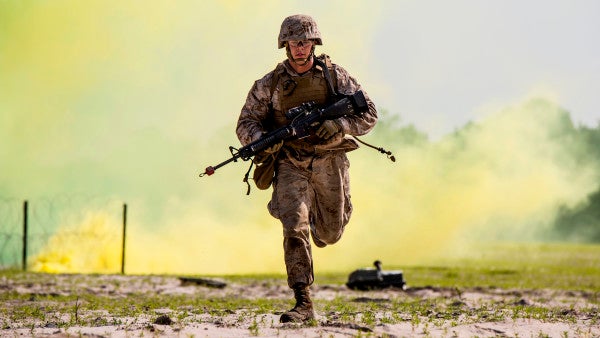 Military service comes with a lot of challenges, from the inherent danger and high stakes of the job to the daily difficulties unique to that line of work.

There’s one hardship that doesn’t get nearly enough attention: The unending quest to find a suitable profile pic for Facebook, Twitter, Instagram, and, well, probably dating sites, too. And there’s one surefire way to ruin an otherwise epic “thank me for my service” photo — a BFA.

For those not in the know, a BFA is a blank-firing adapter that fits onto the muzzle of a weapon and helps ensure that automatic weapons properly cycle when firing blank ammunition.

Nothing will expose your posed heroics, for the training pics they are, faster than a bright red or yellow BFA on the business end of your rifle. It doesn’t matter that you slapped #livingthedream on that photo of you triumphantly directing machine gun fire downrange, that BFA instantly undercuts all the drama.

Here are 9 military photos that would have been badass if it weren’t for all the damn BFAs.

Lance Cpl. Alex Rowan, a combat engineer with 4th Marine Division sprints like a man on a mission — that or on the set of Band of Brothers — during a SAPPER Leaders Course at Camp Lejeune, North Carolina.

Locate, close with, and deafen the enemy

Marines with Black Sea Rotational Force 18.1 form up for a reenactment of their favorite World War II movie scenes, as they advance across a field during training at U.S. Army base Nova Selo Forward Operating Site in Bulgaria on May 10, 2018.

Is it still ‘pew, pew, pew’ if you’re shooting blanks?

Would-be lieutenants at Marine Corps’ Officer Candidate School do their best impression of Bruce Willis’ team of operators from Tears of the Sun as they crawl through “The Quigley” an infamous training exercise at Marine Corps Base Quantico, Virginia.

The end is nigh!

I swear, if you got rid those BFAs, this could be a scene from some post apocalyptic horror flick — I mean, it’d have to be, that’s literally the only time I see someone wearing a gas mask.

Marines with Task Force-Crisis Response Africa simulate a gas attack during a field exercise at Morón Air Base, in Spain on Feb. 7, 2018, and another perfectly framed and lit photo is ruined by a bright red BFA.

Even with the BFAs, this photo is still more realistic than ‘The Hurt Locker’

Soldiers drag the body of a (presumably) perfectly fine buddy to, well, not safety, because we know he’s not in danger — thanks BFAs! — during a training event at Fort Irwin National Training Center in California.