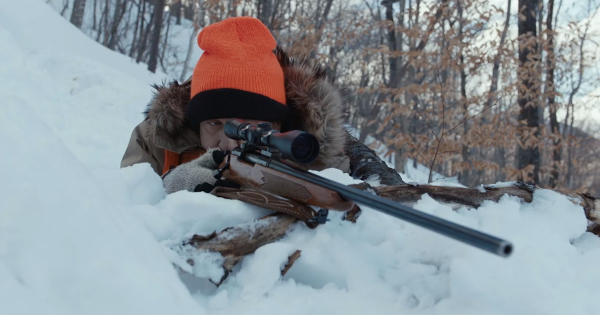 Blood and Money, a new film out this week and shot last year in western Maine, showcases the stunning winter landscape of Maine’s north woods, while telling the suspenseful story of one man’s journey of survival — and revenge.

The movie, originally titled Allagash, was written and directed by Cumberland native John Barr, who previously has worked as a cinematographer and camera operator on films such as Frost/Nixon, Capote and Greenberg. Barr said last year that growing up, he spent time in Allagash and around northern Maine, hunting and fishing with his family. In particular, main character Jim Reed was based on Barr’s father, and the character’s RV in the movie actually belongs to his dad.

“The Jim Reed character is loosely based on my father,” said Barr, in an interview with the blog Hollywood Outbreak. “My dad lives the way that Jim Reed lives.”

According to producer Suza Horvat, the film was shot in and around Bethel, Rumford and Mexico in March 2019, with a small film crew of around 30 people. Though the story is supposed to be set much farther north in Maine, along the Allagash and Saint John rivers, Oxford County, with its closer proximity to Portland and Boston, was a more convenient — and no less scenic — stand-in.

Tom Berenger, best known for starring roles in films like The Big Chill, Major League, Inception and an Oscar-nominated turn in Oliver Stone’s Platoon, plays main character Jim Reed, a retired Vietnam War veteran spending a few weeks hunting in the Maine woods, hoping to bag a buck before he returns home. Though the majority of the film is dialogue-free, Berenger physically imbues his character with a mix of world-weariness and determination.

“Having him in the film, his professionalism, his determination, his strength, all of those characteristics were huge for having him play Jim Reed,” Barr said.

After a week or so spent in the woods, interspersed with trips to town to eat at a favorite diner and chat with a kind waitress, Debbie (Kristen Hager), Jim finally shoots what he thinks is a deer — but it’s actually a woman, holding a duffel bag with a million dollars in cash in it. From there, the story takes off as Jim finds himself pursued by the people that want that money back.

The movie is equal parts Charles Bronson-style revenge flick and Grizzly Adams-esque backwoods survival tale, all with an independent film aesthetic. And it showcases a part of Maine that movies filmed here rarely do: the state in the wintertime and the outdoorsmen and women that take to the woods to hunt and fish.

Blood and Money is available to rent on Amazon, Apple TV, Fandango and many other streaming platforms.