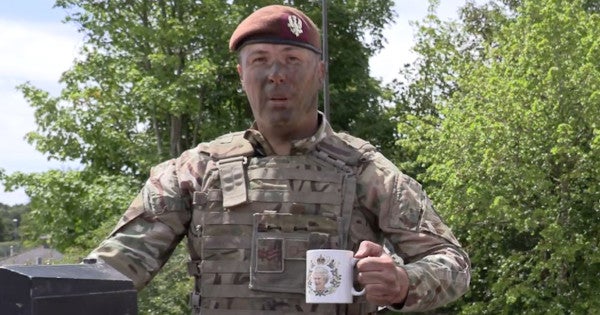 The British Army has got jokes.

In honor of America's Independence Day of July 4, 1776 — when the American colonists declared independence from Britain — the British Army has shared a short video trolling their American counterparts with the best “cuppa tea” recipe.

Shared on the British Army's official Facebook page, the video shows Cpl. Mark Bulbeck pulling up his tank and then addressing Americans: “On your Independence Day we would like to clarify some confusion that has arisen on how to make the perfect British cup of tea.”

As Bulbeck explains, you'll need a teabag, a mug, milk, a spoon, sugar, and a kettle — “not a microwave,” he says — before pulling out a kettle from inside, which come standard in British tanks (For real, having a tank with a boiler vessel, or “bivvie,” is a trend that is even catching on outside the U.K., according to War is Boring).

The soldier then brews a perfect “British” cup of tea, before saying, “Happy Independence Day, and God Save the Queen.”