A British Army captain found himself in these circumstances on Aug. 1 and rendered his exit with extreme prejudice: by tearing the ceramic toilet and steel handrail from the handicapped stall he'd found himself trapped in 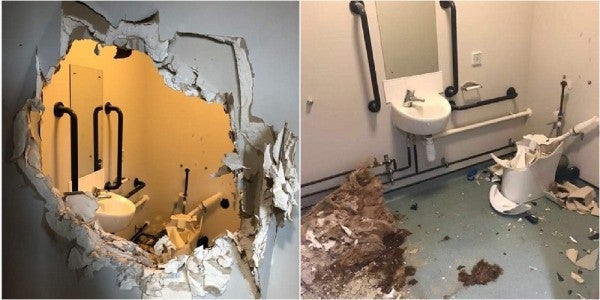 It's been six hours. You're completely naked and locked in the latrine at your barracks. Your soldiers, hammered beyond all recognition, have barricaded the door and are refusing to let you out. What do you do?

Easy: Escape in a way that'll ensure they never mess with you again.

A British Army captain found himself in these circumstances on Aug. 1 and rendered his exit with extreme prejudice: by tearing the ceramic toilet and steel handrail from the handicapped stall he'd found himself trapped in, according to the always-reliable Daily Mail.

The photos from his escape are, well, everything you'd expect.

The Daily Mail reports that the incident took place at the U.K.'s Carver Barracks, the home base of the British Army's 33 Engineer Regiment, an explosive ordnance disposal unit.

The drunken escapades weren't some random barracks hijinks: According to the U.K. Armed Forces Network, soldiers from 33rd spent the day on the parade ground marking the return of a historic 49 Field Squadron to the regiment, its fourth reformation over the last 120 years.

Here's how the saga unfolded, per the Daily Mail:

The captain and his soldiers began drinking heavily after the ceremonies last Tuesday. According to Army sources, the junior ranks undressed their officer after he fell asleep in their rooms and carried him into the cubicle.

A source said: 'When he woke up he started banging on the door, screaming at the blokes to let him out. They replied they'd only let him out if he gave them a pay rise.

'Then he went on the rampage, demolishing the toilet and repeatedly smashing the rail against one of the walls. He made a big enough dent that he could then hack away at the plaster and climb out. The blokes found it hilarious. He's in trouble rather than them because he should never have got drunk in their rooms. Now he's going to have to pay a hefty fine or pay for the damage.

The incident is currently under investigation by British military police. In the meantime, we salute you, anonymous captain: May your joys be as bright as the morning, your years of happiness as numerous as the stars in the heavens, and your troubles but shadows that fade under the might of a steel bar from a handicapped bathroom stall.