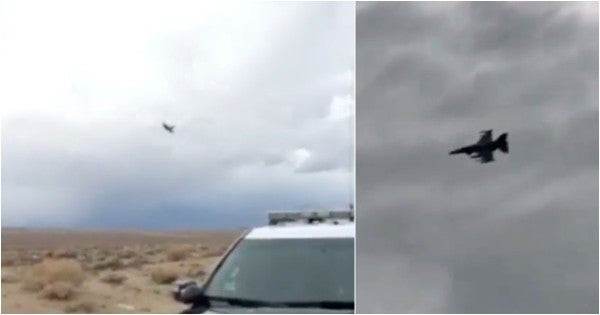 This is what feeling the need for speed feels looks like to those who are tasked by law to slow you down.

Fantastic video captured by a California highway patrolman and posted to Facebook by the California Highway Patrol-Bishop station on Saturday shows an F-16 Fighting Falcon blasting past a patrol SUV parked on the side of a desolate stretch of road.

The CHP station said that the officer who took the video had pulled onto the shoulder after the radar in his Ford Explorer started “going crazy” despite the absence of other cars on the road, only to realize the fighter had triggered the system during a low pass.

While the details of the video aren't totally clear — Popular Mechanics suggests the F-16 could have originated from either the Arizona National Guard or Utah's Hill Air Force Base — it's clear that this is, well, a total dream for anyone who's ever dreamed of blasting past a patrolman without any regard for speed limits.

It's like they say: When you've got it, flaunt it.

SEE ALSO: Boat Captain To US Fighter Pilot: 'Buzz Us Like Tom Cruise Did The Tower In 'Top Gun'

WATCH NEXT: A Su-25 Does A Super Low Flyby In Ukraine