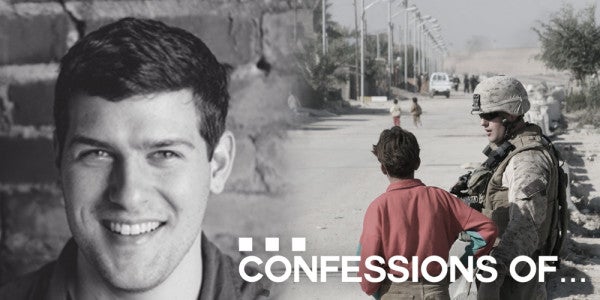 Over the course of three deployments to Iraq as a Marine grunt between 2005 and 2009, Matt Young acquired more than his share of enlisted shenanigan stories — many of which he juxtaposes with moments of grief, excitement, and heartfelt introspection in his memoir Eat the Apple. But we’re not here to talk about the heavier stuff, not this time.

Task & Purpose got ahold of Young to ask about the worst ass-chewings he ever got in the Corps, like that time he was accused of hazing a private first class as a private, and the role he played in a viral video involving a ghost-ridden MRAP.

Our conversation has been lightly edited for length and clarity.

T&P: What’s the worst ass-chewing you ever received?

MY: Okay, yeah so the worst one I ever got was on my second deployment in 2008, after we filmed a video of my lead vehicle commander — I was the rear vehicle commander — and he wanted to film himself ghost-riding his MRAP. And so he did, and then he proceeded to upload that video to YouTube.

I didn’t film it, though you can see my truck take a hard left turn.

MY: The commanding general of Multi-National Force West saw the video on YouTube and that shit rolled downhill super fast, and landed right into our lieutenant’s lap. They put us in this tiny room in a FOB southwest of Fallujah that was made for interrogation and they turned a spotlight on us, and they let us have it. They disbanded our entire platoon and I went from vehicle commander to gunner, and my buddy who was ghost-riding, he was a corporal and got busted to lance, then they sent him to guard and he spent the rest of the deployment there.

Related: We’re Launching A Confessions Column. To Get It Started, Here’s Our Dirty Laundry »

T&P: Any other memorable ass-chewings?

MY: In 2005 I was a private with 3rd Battalion, 5th Marines at Camp San Mateo, in San Diego, and I was accused of hazing a private first class.

To my credit, I did not break at all. I stayed at the position of attention, and said “I wasn’t hazing him first sergeant, I was training him.” And he didn’t know what to do. He got real quiet, and I don’t know if you’ve even seen it, but a first sergeant’s office has a little hatch between the company office and his office, and that hatch had been open and I just watched it close really slowly.

T&P: I need some context, Matt. You were a private, but did you have more time than that guy, or were you new?

MY: No, no he had more time than me. He was a , but he was kind of a dirt kid. We had gone on a 96 and our senior guys were on leave, and all the boots left and went to Oceanside all weekend, but he stayed in. He had a trashcan, like a 40-gallon trash can, and he just filled it up with trash all weekend long; Monster cans, trays from the chow hall, and didn’t empty it.

MY: Yeah. When our senior guys came back they were pissed. They were pissed the 96 was over, they were psised they had to train to go back to Iraq, and they were just so mad at everything, as senior Marines often are. So when they came in that room, it stunk to high heaven because he hadn’t emptied the trash in four days and it was sitting in his locker. Everything was just marinating in trash stink.

They kicked over the bin, then made us run this hill that they call first sergeant’s hill at San Mateo, so when we got back, three other boots that came with me got him in a room and made him clean it and probably pushed him around and yelled at him a bit, and he went and told somebody.

T&P: Between Pvt. Young hazing Pfc. Trash Kid, and ghost-riding an MRAP, we’re good on Marine Corps stuff. How about from your time as a successful author? Any crazy or outlandish questions from a reading?

MY: There’s always people who are super gross about it. They focus on the grotesque shit. like: Did you ever kill anybody, or tell me what it felt like to watch somebody’s face get blown off of their skull? And I’m like, “I dunno, how do you think it would feel like to watch somebody’s face get blown off their skull?” There’s a real lack of reflection. People don’t always treat you like you’re a human, they treat you like your brain is wired differently, like you must think about these things differently than someone else thinks about them.