We’re Launching A Confessions Column. To Get It Started, Here’s Our Dirty Laundry 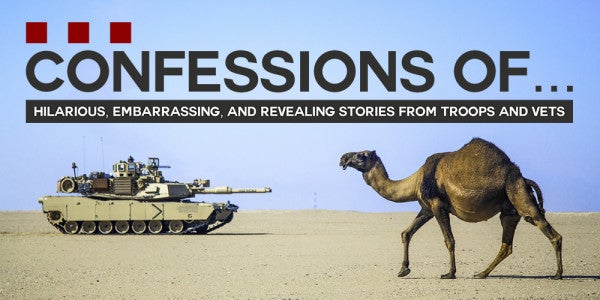 What’s one of the dumbest things you did as a boot? What’s the worst ass chewing you ever received? Did you pull any pranks, or were you pranked? What’s something only your MOS can do, or get away with doing? And, do you have any embarrassing or funny stories from your time in?

To kick off the return of our Confessions Of format — where service members and veterans offer up revealing tales from their time in the armed forces — it only seemed fair that that the Task & Purpose team put a little skin the game. So after a few stiff drinks, my colleagues and I subjected ourselves to some of the same probing questions that I’d normally save for those brave or foolish enough to agree to an interview for this column. And the results were, well, what you'd expect from a bunch of vets (and one nasty civilian) who spent a few years in and around the military: There's an anecdote about an a-hole commanding officer; at least one guy whose war story begins with “no shit, there I was shitting”; there's an ill-advised dick drawing; misuse of medical supplies; and oh so much more.

Here’s a laundry list of stupid stuff Task & Purpose staffers witnessed, and a number of embarrassing things we did as boots, and continued to do long after we should have known better.

What’s one of the dumbest things you did as a boot?

There were a lot, to be honest. I went to MOS school at a joint service base and once called an Army command sergeant major “sarge” because I thought that’s just how they did it over there. I was wrong.

When I got to the fleet, I spent an afternoon taking down phone messages for Capt. America, Capt. P. Lannette, and didn't catch on until Capt. Kang R. Ooh called twice demanding to talk to Col. Sanders.

Then there was this other time at Twentynine Palms, California, during pre-deployment training when I recited the “duality of man” scene from Full Metal Jacket in its entirety to a sergeant major who told me to take off the peace pin I wore on my camera strap. I thought he was quoting the movie. He was not.

Like every enlisted Marine, I’ve saluted an enlisted sailor in a service uniform.

Any other funny or embarrassing stories?

In 2011, during a multi-day movement in Afghanistan, I gave myself food poisoning for four days. By the end of it, I’d become so adept at dropping trou and a deuce, that I even wrote about it in another story.

Did you pull any pranks, or were you pranked?

For a while I was a medic attached to an infantry platoon and so, naturally, I got a lot of shit for being a POG. One day while on refit at the FOB I saw an opportunity to get my revenge. I took a sharpie to the Porta-John outside our tent and drew a picture of a guy with a really really small penis. Then I wrote “11B’s have macaroni weiners” and drew an arrow to the micropenis. This wasn’t really a prank, but it certainly ruffled feathers.

What’s something only those in your MOS could do, or get away with doing? Think funny unit traditions.

On Saturdays and Sundays when we were hungover we’d all hook each other up with IVs in the barracks. An hour or so later we’d be good to go and ready to start drinking again!

Any embarrassing or funny stories from your time in?

When I was deployed to Afghanistan in 2010, I made the mistake of eating some questionable food, and developed some sort of shit disease, where for about three weeks I couldn't shit solid. As you can imagine this makes life rather terrible, especially when you are flying eight hours a day every other day. I devised a system to hide my pooping shame. I would not hydrate and literally shit my brains out in the Porta-Johns before a flight. Empty the ol' gas tank so to speak. Then fly the mission.

It was so bad I couldn't risk a fart. You ever support a troops in contact while holding in a high altitude fart? It's like both external and internal pressure all at the same time. Well this one time, after dealing with that, the plane landed and I made a run for the one Porta-John on our side of the flight-line. When I opened the door, it looked like a shit demon exploded. There was poo on the walls, on the ceiling, everywhere. The smell will stay with me forever, burned in my memories like a shit scented candle.'

Brad, finish the story. Did you still use it?

Did you pull any pranks, or were you pranked?

When we were waiting to invade Iraq in ‘03, all of the battalion’s company-grade line officers were in a single circus tent. On any given day, there was maybe 90 minutes of work to fill 12 hours of daylight, so most of us tried to sleep in a little to be bored for a shorter amount of time during the day.

Alpha Company, though, had a tightass C.O. — let’s call him Capt. James — who thought he was god of the light switch, and flipped the lights on every morning at 0600. That lasted a couple of days until we started fucking with him: Wrapping the light switch in duct tape, removing all of the light bulbs, etc. It was so much more satisfying to wake up to the sounds of him swearing.

The best part, though, was on the night before the invasion, when a Cobra pilot fired a Hellfire at James’ tank. CLASSIC WINGER PRANK. Luckily, the missile hit the engine of the tank, and no one was hurt. James was a lot cooler after that. We joked that it took a Hellfire missile to knock the stick out of his ass.

Branch, job, and years in: Nasty civilian who did multiple tours to DC and New York City during the Content Wars

What’s one of the dumbest things you did as a boot?

Well, I never served, but during my first two weeks here at Task & Purpose I mistakenly referred to Maverick from Top Gun as an Air Force pilot. I still have bruises from the soap.