The Iran Hostage Crisis takes center stage in Oscar-winning filmmaker Barbara Kopple's new documentary "Desert One," a film that aims to recognize the heroism of the men who undertook a failed mission in 1980 to rescue 52 Americans held in Tehran by Iranian revolutionaries 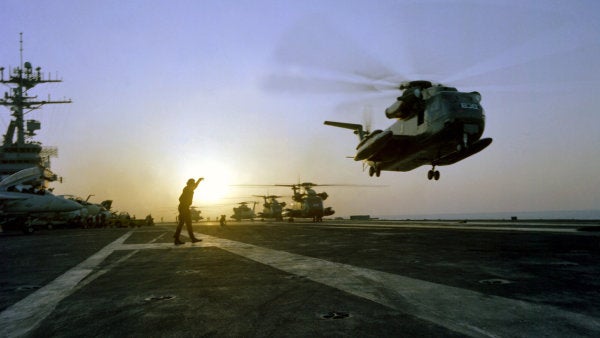 The Iran Hostage Crisis takes center stage in Oscar-winning filmmaker Barbara Kopple's new documentary Desert One, a film that aims to recognize the heroism of the men who undertook a failed mission in 1980 to rescue 52 Americans held in Tehran by Iranian revolutionaries.

In our collective “heroes don't get captured” cultural moment, the film offers a powerful reminder that it's the commitment to serve and willingness to undertake the mission that define our heroes. The hostage rescue may have been stymied by weather conditions and a lack of solid intelligence on the ground, but the special ops forces who planned and carried out the mission took enormous risk and made huge sacrifices for their country.

Desert One will open in theaters around the country on Friday, August 21 or be available to stream via the Virtual Cinema service that studios and independent theaters are using to to support local movie houses during the COVID-19 pandemic. You can find out where the film is showing via the movie's ticket page. If there's not an affiliated theater in your town, rent by picking any theater offering the Virtual Cinema option. If that's too complicated for you, the film will be available On Demand via cable systems, Apple TV+, Amazon, Fandango, Google Play and YouTube on September 4.

Few national crises have gripped the public as much as the Iranian student takeover of the U.S. Embassy in Tehran on November 4, 1979. The students were revolting against Shah Reza Pahlavi, a ruler they believed was beholden to American oil interests and who, in fact, had been installed as leader after a CIA-funded coup against the democratically-elected Prime Minister Mohammad Mossadegh in 1953.

It was the height of the Cold War and Mossadegh was getting pretty friendly with the Soviet Union. Under the anti-Communist Domino Theory that informed U.S. policy at the time, a Red Iran would be a disaster for the region and our spies chose to act.

Related: The unbelievable story of a Texas businessman who launched a freelance commando raid in Iran

Desert One opens with a brief history lesson about the Shah's installation and rule, educating viewers about the brutality of his SAVAK secret police and how the royal family's embrace of Western values alienated a large number of the country's Islamic population.

Activist students stormed the embassy after the United States allowed the recently deposed Shah and his family to enter the United States for medical treatment. The new government wanted to try the former leader for his crimes against the people and there was widespread belief in Iran that the American government was planning military action to reinstall the fallen ruler.

Kopple quickly moves on to the issue at hand, introducing viewers to a few of the hostages who would eventually spend 444 days in captivity. Most notable is Kevin Hermening, a young Marine who was assigned to embassy security and whose mother notoriously traveled to Iran and negotiated a brief reunion with her son before attacking the government's handling of the crisis.

President Jimmy Carter shows up to both defend and take responsibility for his approach to the crisis. Determined to use peaceful negotiation as the tool to secure the hostage release, he found himself facing off against the Ayatollah Khomeini, the religious leader whose teachings had inspired the revolution.

Khomeini wanted one thing only: The USA would get its hostages back once the Americans turned over the Shah to the Iranian government. United States policy wouldn't allow for that, as the Shah and his family were certain to be executed after whatever trial they had. There was a stalemate.

Which brings us to the heart of the movie. Even though Carter didn't want to utilize military force in Iran, he approved the planning of an operation that would aim to rescue them using a secret Delta Force team led by unit founder Charlie Beckwith. We meet several of the operators and a few of the Air Force pilots set to provide transport.

It's difficult to convey just how obsessed Americans became with the hostage crisis in 1980. Ronald Reagan was running for president and insisted that Carter's lack of military action made the United States look weak. ABC newsman Ted Koppel launched “Nightline,” a new late-night news show that devoted a half-hour to the day's developments every weeknight. Carter's administration was paralyzed.

Finally, Carter realized that negotiations were getting nowhere and approved the mission for April 24, 1980. All of the CIA's operatives in Iran were now hostages in the embassy so the strike team had spent months watching news footage to glean the limited intelligence they had for planning the missions.

The mission included three EC-130Es loaded with jeeps and other logistical supplies, three MC-130E Talons carrying the operatives and eight RH-53D Sea Stallion helicopters for hostage transport. The plan was to land on a dry creek bed outside Tehran, drive to the embassy and extract the hostages.

The operation required a minimum of six working helicopters to succeed and three of the eight had mechanical issues on the night of the raid. After leadership made the decision to abort, one of the helicopters tried to take off in a sandstorm and crashed into one of the C-130s carrying Delta Force troops. Eight men were killed in the subsequent fire and had to be left behind as sunrise approached.

The failure proved a disaster for the Carter administration. The Iranian revolutionaries paraded the burnt bodies of the fallen soldiers and pilots before television cameras before turning them over to the Red Cross. Reagan hammered his campaign themes and the hostage crisis was likely the number one reason Carter lost to him in November.

The Shah died from cancer in July 1980 and the Iran-Iraq War began in September. The hostages were no longer the focus of the Iranian government and their release was now in everyone's best interest. Unfortunately, the Ayatollah had a deep personal dislike for Carter and wanted to humiliate the American leader as much as he could.

As inauguration day 1981 approached, the Carter administration worked furiously to negotiate, agreeing to release frozen Iranian assets in U.S. banks. Iran dragged out the agreement as long as it could and finally allowed the hostages to take off from a Tehran airport just an hour after Reagan was inaugurated.

Former president Carter flew immediately to meet the released hostages in Germany, emphasizing his personal commitment to the health and safety of the Americans who unwittingly played a role in ending his presidency.

Desert One exists to let the men who executed the mission tell their stories. Kopple firmly believes in their heroism and makes a big point of telling the story about the team's return to the island of Masirah. British military manning the airfield figured out what the mission had been and delivered two cases of beer to the Americans with the message “To you all, from us all, for having the guts to try” written on one of the cardboard box flaps. That message has endured as the motto of the USAF's 8th Special Operations Squadron: “With the guts to try.”

Kopple has won two Academy Awards for Best Documentary for 1976's Harlan County U.S.A. and 1990's American Dream. Those films, about a miner's strike and a meat-packing plant strike, display a remarkable ability to communicate the experiences of men and women in the thick of the fight and that skill most definitely translates to Desert One.

The director also interviews students who were involved in the embassy takeover and a man who was traveling on a bus that accidentally encountered the operation landing site while traveling across the desert, and witnessed the entire ground disaster. The mood is generally respectful, but be warned: One hostage taker is still filled with anti-American glee as she recounts her experiences.

What the movie doesn't do is delve deeply into the operation's mistakes. There was never a full-dress practice run before the actual mission (a fact mentioned in passing in the film) and Kopple never asks anyone about what kind of maintenance issues would lead to a full third of the helicopters failing to complete the mission.

Disappointment over the failed mission has obviously haunted everyone involved over the last 40 years, but Desert One argues that the attempt was the least worst option available at the time and, with a bit of luck, the special ops team could have succeeded. It's their service that Kopple wants to recognize and Desert One is a fitting tribute.