A drunk driver crashed into this Cobra attack helicopter

In news you didn't expect to hear today. 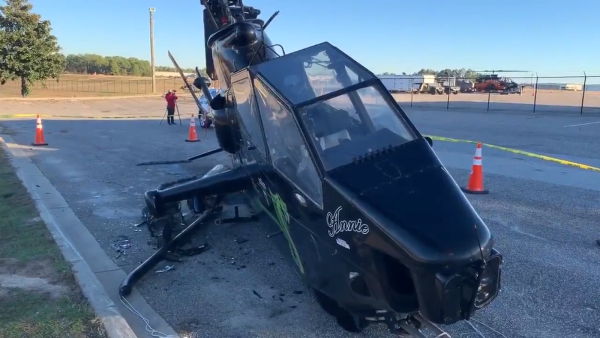 In news you don't hear everyday, a drunk driver recently crashed into an attack helicopter in Columbia South Carolina. Fortunately, the 1967 AH-1F Cobra was not airborne at the time, nor was anyone piloting it. In fact, it was parked on the side of the road, as part of a local display set up by the veterans charity Celebrate Freedom Foundation.

Sober or slammer! The driver who wrecked into this helicopter was arrested for DUI! This holiday season, drink responsibly!!!!!!!! pic.twitter.com/8oDbGpmN01

According to the tweet, the crash may have inflicted “about a half a million dollars” worth of damages, and resulted in the arrest of the driver.

“This holiday period, if you're going to go out to a holiday party or visit friends and family, make sure you have a plan in place if you plan to consume alcohol,” the narrator says in the clip. “Don't have us knocking on any more doors, for heavens sake, and don't be like this guy.”

Despite the damage to the aircraft, Lori Wicker, the director of Celebrate Freedom Foundation's educational program, also used the incident as an opportunity to implore viewers not to drive drunk (or crash into any Cobras, for that matter.)

The charity uses the helicopter, dubbed “Annie” as part of its STEM (Science, Technology, Engineering, and Mathematics) education program, which is aimed at educating K-12 students on aviation.

We can only hope that helicopter maintenance and repair will make it onto the curriculum after this debacle.