1st Lt. Haley Johnson is a registered nurse assigned to the mother/baby unit of Fort Benning’s Martin Army Community Hospital, but the soldier has found fame thanks to Dwayne “The Rock” Johnson’s new show, The Titan Games on NBC. 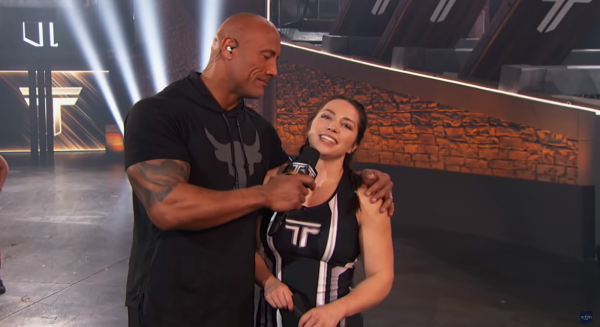 1st Lt. Haley Johnson is a registered nurse assigned to the mother/baby unit of Fort Benning’s Martin Army Community Hospital, but the soldier has found fame thanks to Dwayne “The Rock” Johnson’s new show, The Titan Games on NBC.

The action star’s new series draws inspiration from the sort of physical challenges many of us grew up watching on shows like American Gladiators and Nickelodeon’s Guts, with contestants testing their mettle against a series of grueling obstacles.

In order to win The Titan Games, contestants must make it all the way up and down the show’s “Mount Olympus,” completing challenges all along the way. Once a contestant makes it off the faux mountain, the tough part isn’t over — they then have to drag a 200-pound ball by the chain a good distance before using a sledgehammer to break through slabs of concrete to reveal a key the contestant can insert into a nearby slot to claim victory.

Lt. Johnson, 26, may spend her days nurturing newborns, but her performance on the Titan Games made it clear that a soldier’s gentle ways are no sign of weakness. In fact, as the 5 foot 3, 145 pound Johnson cruised through the daunting obstacle course, even the massive Dwayne “The Rock” Johnson drew attention to their shared last name, calling the soldier “Johnson strong.”

It’s not quite as catchy as Army Strong, but as far as slogans go, it’ll do.

“This first lieutenant, Army nurse, out here doing her best…You know where she works in the hospital, right? She delivers the babies…She is about to deliver another win…Haley Johnson, so impressive…” The commentators exclaimed during Lt. Johnson’s run.

In fact, the soldier seemed to be on her way to cinching The Titan Games grand championship, winning in two straight main events, before ultimately falling just seconds behind on the third. Despite not taking home the overall title, Johnson’s incredible performance has been applauded by service members all around the country. For Johnson though, her performance on The Titan Games was about more than her role as a soldier — it was about making her family proud.

Tragically, Johnson’s father was diagnosed with terminal cancer last year, and it almost made her pass up the opportunity to appear on the program. Her mother, however, reminded her that her father would want her to take on this new challenge.

“My mom was the one who probably pushed me to do it the most,” said Johnson. “Because my dad was sick and she just knew how much he loved the idea of any of these types of shows. And how much he would have supported me and believed that I could do it and that I could win. So he just always reminded me of those things when I would doubt doing it.”

Johnson’s father passed away in December, but despite the tragedy, Johnson channeled her father’s memory to help her push through her difficult training regimen.

“He would just always tell me, ‘I am so proud of you,'” she said. “‘I am so proud of everything that you are doing.’ And he would constantly remind me of those things as I was doing them. And then he would always tell me that if I wanted something, I just have to go for it… And he said, for me it seemed like anything was possible.”

The young soldier works as a registered nurse, but being an athlete has been a part of her since long before The Titan Games. She was a standout athlete in high school, competing in pole vaulting, bodybuilding, volleyball, cross-country, and cheerleading for the football team.

In order to prepare for The Titan Games, Johnson approached the challenge like any soldier would: First researching what types of obstacles she’d face, and then developing a training regimen around them. She even went as far as recreating events she’d seen on the show, just like Special Forces operators recreate scenarios to train for difficult missions.

Despite Johnson’s athletic background and extensive training, she credits her time as a soldier for helping her compete in The Titan Games.

“You know, you adapt and overcome,” said Johnson. “So I feel like there’s a lot of translation from military training — just predicting the unpredictable, or being able to be flexible and adapt and overcome. That definitely was translated well into the competition.”