How to do Fleet Week in NYC like a pro

Ask any sailor or Marine who has experienced New York Fleet Week firsthand about their experience, and the first reaction is likely to be a knowing smirk 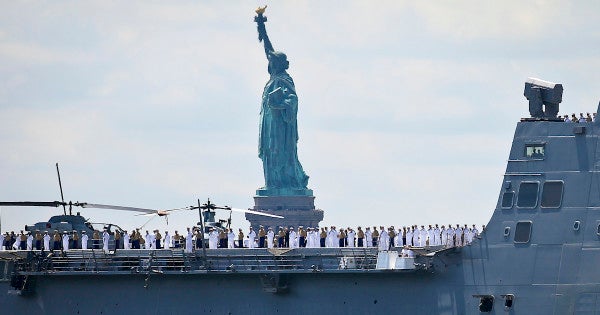 Ask any sailor or Marine who has experienced New York Fleet Week firsthand about their experience, and the first reaction is likely to be a knowing smirk.

Fleet Week comes to New York City for the week surrounding the Memorial Day weekend every spring. Suddenly, a city that has almost no military presence is filled with sailors and Marines in uniform.

I was born and raised in New York City. A visit to the aircraft carrier USS John F. Kennedy as an elementary school kid left an indelible impression: The Navy was really cool. As a teenager, my parents forbade me to go anywhere near sailors during Fleet Week. As a 23-year-old ensign, I experienced Fleet Week in my summer whites as a member of the fleet.

Service members arriving on the half a dozen ships that participate will find that they will be berthed all over the city. My apologies to the ships stuck on Staten Island; you will have to take the ferry to get anywhere fun. The best deal is to be on the big-deck amphibious ship that gets to dock in midtown near Chelsea Piers .

Nearly everything during Fleet Week is free or steeply discounted for service members: Many of the Broadway shows offer free tickets, television programs bring service members into the audience, and the museums are all free.

Service members may also find that their meals and drinks are paid for by other customers, and that cover charges at popular nightlife hotspots are waived — and service members who have overnight liberty may find that the hotel they booked turned out to only be a place to leave a bag.

Here are some tips for surviving Fleet Week in your summer whites.

They will get utterly destroyed. Summer whites plus NYC subway? Please. Junior enlisted personnel and Marines are slightly luckier, as the Navy Service and USMC Service “B” uniforms are slightly more stain-fighting, but it's always good to have an extra set.

It will grow legs. People will want to wear it. In fact, women will want to try on the female cover even more than the male cover. I went to a bar with 10 other junior officers, and I was the only woman. We all left our covers on a table at a bar. Mine was the only one stolen.

3. Upgrade your seats at Yankee Stadium.

I have season tickets in the bleachers at Yankee Stadium, and brought a few people to the game. We were given the tip that if we went to the box office in uniform, we'd be upgraded. Sure enough, a row of bleacher seats turned into a row in club seats behind home plate. I don't know if this applies at Citi Field as well, but I'm not really sure why you would want to go to a Mets game.

4. Pregame with the Canadians.

Every few years, a coalition ship — typically Canadian or British — will be invited to participate in New York Fleet Week. Unlike the U.S. Navy, our coalition partners are allowed to drink on board their ships, and even have a bar on board. Drinking with our coalition partners not only helps build relationships with our closest allies, but also is a cheap way to get a buzz before heading on the town.

5. For nightlife, get out of Midtown.

There are a lot of Fleet Week specials in Midtown, and service members flock there because ships dock nearby and they want to be near Times Square. The city is filled with great bars. Go to the ones that are filled with actual New Yorkers, not other sailors. Instead check out Amsterdam Avenue on the Upper West Side, Alphabet City, or the Meatpacking district.

6. For accommodations, stay in an Airbnb or check with private clubs.

The elite New York Athletic Club offers reciprocity with the Marine Memorial Club in San Francisco (free membership for active duty) and Army and Navy Club in D.C. (discounted dues for junior officers and non-D.C. residents). There are also numerous university clubs throughout the city that will offer reciprocity as well. This is a great way to get superb accommodation below the market rate in the heart of the city.

For those wishing to participate in Fleet Week who aren't part of the fleet, here's the schedule of events.