We've got everything you need to help land you in crushing debt as you spend huge wads of cash flaunting your almost service. 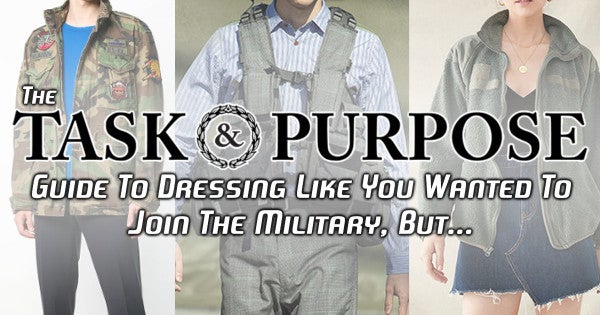 Editor’s note: An earlier version of this article was originally published on Feb. 1, 2019.

It’s alright, we understand, you went to college, or beauty school, or had to spend the weekends teaching aikido at the local strip mall.

But there’s no reason that should limit your wardrobe. After all, military stuff is rad! Cargo pants are dope. And combat boots are badass, so long as you don’t have to wear them every day for years on end. Meanwhile, a hodgepodge of random badges and upside down rank insignia brings an air of command to any outfit. (A warning though: Try not to be too authentic, you don’t want to be accused of stolen valor. You just want to look good.)

No longer will your notional national service be so easily dismissed. Now, you can swagger into a bar and sash-sham your way to the nearest Oakley-sporting, operator-hat rocking vet bro and bask in that look of approval. All you need is a credit card, or a trust fund, and an abundance of gullibility because these items aren’t cheap, and this list totally isn’t sarcastic.

The Pièce De Résistance. This military-style jacket from Ralph Lauren practically screams “I really wanted to enlist, but my mom told me not to and gave me $400 instead.” Which is great, because the jacket costs nearly that much on Farfetch. At $398 it’s not cheap, but you can’t put a price on your faux-military fetish, so what are you waiting for? Drop some cash on this bad boy, and who knows, maybe you’ll get a free meal if you swing by Applebee’s on Nov. 11. Nothing says “when I’m not at a bar spending $22 on an old fashioned, I’m out hiking in the woods and training for Spartan Races” like name brand combat boots, and there are plenty to choose from.

However, if Nike’s collection of Special Field Boots are too militant for your tastes — and that’s fair, you’re trying to impress folks, not invade Baghdad — then there are plenty of other options. Consider Converse’s Chuck 70 Utility Hikers, for when you can’t decide if it’s time to head to the range or do an ollie on your skateboard while you listen to Green Day. Or if you just want to operate and chill, check out Nike’s SF Air Force 1 sneakers, which have an abundance of buckles and latches so you know they’re tactical. Modeled after the iconic Marine Corps dress blue uniform, this Banana Republic x Olivia Palermo Belted Military Jacket exudes style and grace, the kind that only comes when you knock-off more than two centuries of martial tradition. Unfortunately, the jacket is no longer available on Banana Republic’s site, although it appears to be on sale on eBay and in other e-markets.

But if you’re looking to save some cash, there’s always a cheaper option — and no, of course, I won’t suggest that you enlist — just go to your local military surplus store and buy an actual dress blue jacket. At $4,600 this suave sailor’s jacket from Ralph Lauren isn’t for the casual consumer of all things “mil.” In fact, it would cost a four-star admiral who makes at least $15,000 a month a week’s worth of pay.

However, for your typical early 20-something, you know, the type of person who’d actually wear a semi-stylish jacket like this, it’d take more than two months to pay off, considering that on average, Americans that age make between $22,000 and $26,000 a year. And that doesn’t even take rent or living expenses into account.

And that is why this jacket is reserved for those select few who can tap into their family’s bank account, sell some shares, hock a few priceless pieces of art, or pilfer their trust fund. After all, making bank, like rank, has its privileges. When your everyday carry just won’t fit in your pockets, it’s time to change tactics, and Nike’s Sportswear AF1 tote bag will do the trick. At $85 it ain’t cheap, but can you really be that surprised? Just look at all that MOLLE! So many places to tuck pens, and clip-on carabiners, and slip in a few chem lights, which are sure to come in handy when you go camping or during your next trip to Burning Man. This ensemble from designer Junya Watanabe’s 2018 spring and summer men’s collection is the peak of fire team fashion. Clearly designed for the guy who just started his gig in high finance but wants to impress his colleagues by being a silent, albeit loudly dressed professional, it offers that perfect blend of pinstripe, mag pouches, and swagger that says “I would have joined the military, but then I remembered I’m rich AF. Lol. Let’s go get wasted on Moscow Mules, and smoke one of the 13 vape pens I have tucked away in all these pouches. So what that it’s only 10 am on a Tuesday.” This $59 Vintage Surplus Cozy Fleece Jacket from Urban Outfitters is exactly as advertised: It’s so authentic that each purchase is likely to come with a half-used can of dip, or a single-use mini-bottle of Tabasco sauce in the pocket. Just read the reviews on Urban Outfitters’ site:

“I’ve had the jacket for 5 days now and I have had to patch two holes. When the jacket arrived it was stained and had a pipe screen in the pocket.”

“Not really vintage as I’ve seen others with it. Smelled of wintergreen and diesel right out of the packaging.”

Unfortunately, the jacket is no longer available on Urban Outfitters’ online store, however, it seems entirely likely that you could find a similar buffalo jacket at your nearest military surplus store, or discarded carelessly in a dumpster, mostly because this is as good as stopping the cold as a napkin with holes in it. But, it is legit overpriced mil-swag, and that’s what you’re here for.

If you’re looking to throw caution to the wind and get as close to stealing valor as possible, then this $50 Navy Sailor Hoodie, or sweatshirt, might be for you. With a plethora of ribbons, badges, and unearned rank insignia, you’re sure to be the talk of any room you’re in, and if you’re lucky you might get a discount at your nearest chain restaurant… so long as it’s not near a large U.S. Navy or Marine Corps installation.

But fair warning, something tells me this sweater won’t be around long.

Yeah, I was in the Marin- err, Marauders. Ralph Lauren’s Marauders.

Originally this Fleece Graphic Sweatshirt from Ralph Lauren was listed on their site, but as of Jan. 31, it’s no longer available. Mostly because the Marine Corps shot the designer a friendly reminder that the logo looks an awful lot like the service’s emblem, which is trademarked.

But, it looks like it’s still available elsewhere, so if you’re looking for a new sweater to wear on your early morning runs, then have at it, and enjoy the double takes as onlookers wonder: “Hey, was that person a Marine, and why the hell were there two anchors on that EGA?”

Glowbelts, it’s what all the troops are wearing…

Did you know that glow belts are non-scientifically proven to make you go faster? No? Glad I could help. Yes, it’s pretty much the same as putting a racing stripe on a Ford Pinto. Why else would hundreds of service members be rocking this badass battle belt? Obviously, there’s a good reason for it — we all know commanders wouldn’t order their troops to do something without one.

So wrap this neon cord around your waist, just below your cross-fit toned abs, and prepare to leave everyone in the dust the next time you show up at a Tough Mudder event. All you need to do is drop $30 (shipping not included) on this Rothco reflective PT belt, available on Urban Outfitters. Additionally, this belt is sure to keep you safe from everything except for angry SNCO’s and sarcastic former service members. And be sure to tell your military buddies just how much it cost, they’ll be… impressed. I promise.