We salute the 4 soldiers who shoveled 1.6 million pounds of sand to build this HESCO tower 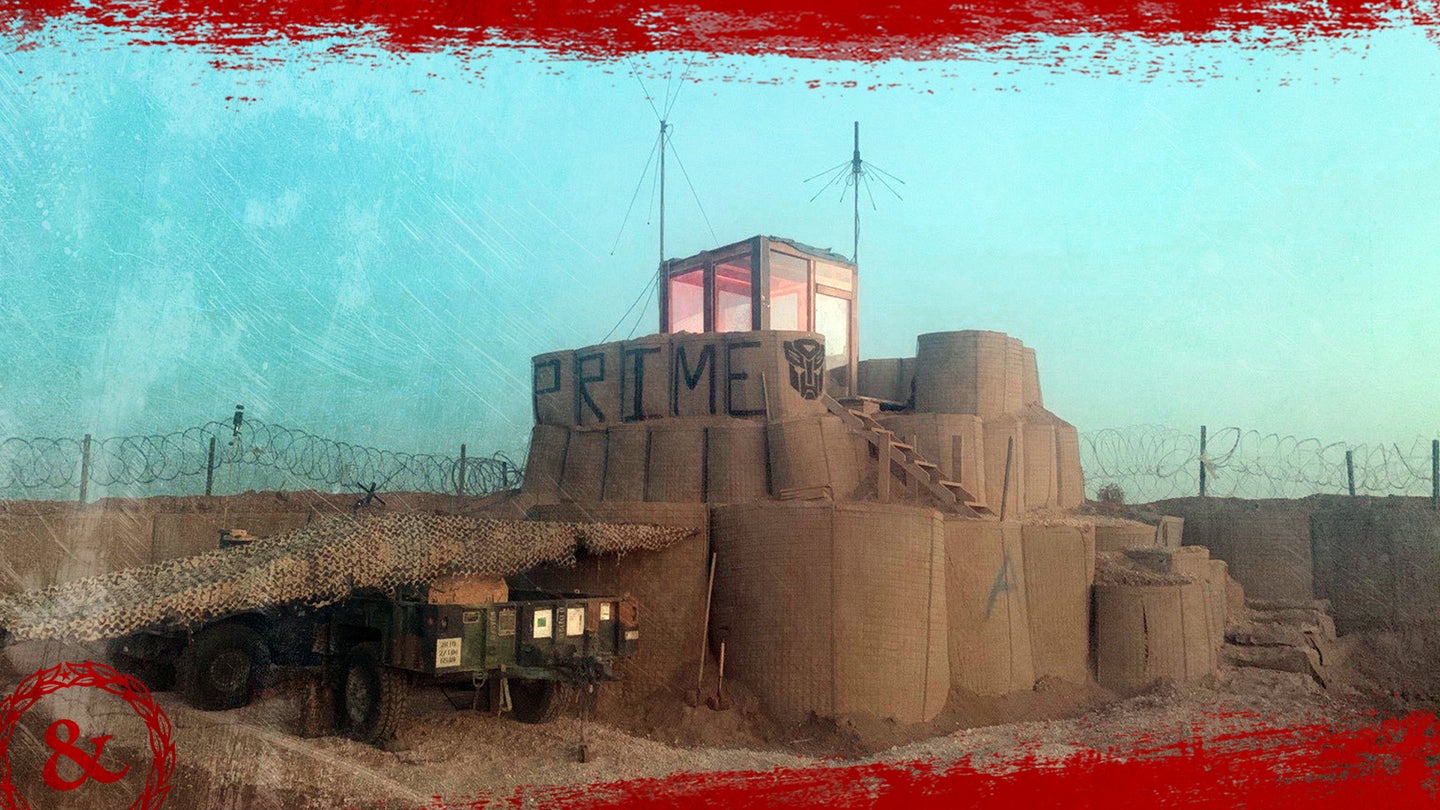 There is no more recognizable monument to America’s Forever Wars than the HESCO barrier.

A staple of austere military posts around the globe, the rectangular mesh wire and canvas-draped boxes are a building block of base defenses, and so much more: they’re military-grade LEGOs; they’re safety and security; they’re cultural touchstones.

HESCOs are so ubiquitous at military bases that they bleed into the background and become little more than coyote-brown noise, hardly noticeable or worth a second glance — that is, of course, until you’re told to fill one, or 40, by hand.

Which brings us to this photo of an air traffic control tower at an outpost somewhere in the Middle East:

The structure, named ‘Prime’ after the Transformers franchise, was built over two months by soldiers deployed in support of Operation Inherent Resolve with Foxtrot Company, 2-104th General Support Aviation Battalion, which is part of the Army’s 28th Expeditionary Combat Aviation Brigade.

The photo was one of several published to the military’s video and photo database by Army Capt. Travis Mueller earlier this month under the headline ‘Resourceful Soldiers build ATC tower at remote outpost.’

But “resourceful” doesn’t quite cut it, considering that four soldiers moved more than 1.6 million pounds worth of sand, mostly by hand, to build it.

We know that because we did the math.

And we did the math because we here at Task & Purpose wanted to lay out in painstaking and excruciating detail just how much work goes into creating one of those mil-spec ziggurats you see at forward bases worldwide. After all, if a bunch of exhausted soldiers had to build it, the least you can do is read about how much work it took to do it.

That meant identifying the HESCOs used, their relative dimensions, and how much sand was needed to fill them. Then we had to calculate just how much dirt those poor saps had to shovel.

To do that, we needed to find a HESCO expert, and there’s perhaps no one better than Keith Anderson, a former Army paratrooper who served with the 82nd Airborne until 2003. After getting out of the military, Anderson took a job with HESCO as the regional support manager for Afghanistan and the Middle East.

For more than a decade, Anderson worked for HESCO, building bases in 34 countries, including Iraq, Afghanistan, Sudan, Lebanon, Columbia, Mexico, Pakistan, and Yemen, to name a few. He lived and breathed HESCO. Thought in HESCO. Took time in terms of HESCO — how long it would take a crew to fill the barriers. What variables impacted his timetables? Were the workers U.S. troops being ordered to do the job by an angry first sergeant, or were they paid contractors? Were they motivated? Well-fed? All those details would add or subtract a few minutes and impact how many cubic feet of dirt could be moved in a day.

If you had the right people, and the right equipment, like a front-end loader, then the job could be done in a (relative) flash, Anderson said.

“Let’s say you’re building a big old perimeter wall around a base,” said Anderson, who now runs his own company, Flood Defense Group, which builds barriers to prevent flooding in the U.S. “It’s roughly 2 minutes, per cubic meter of dirt filled, which is about 300 cubic meters a day.”

Given his expansive knowledge of all things HESCO, and his experience building the same kinds of structures these soldiers put together downrange, Anderson seemed like a perfect fit to help us understand exactly how much dirt these soldiers had to move to make this wonderful monstrosity.

The soldiers who built the tower used approximately 30 MIL 7s and 10 MIL 1s. The larger HESCOs, the MIL 7s, were used for the first and second layers, and the smaller MIL 1s rounded out the top floor, leaving room for a wooden staircase up to the tower, which appears to be reinforced with some sandbags and ballistic glass. There’s also a number of what appear to be chopped-in-half HESCOs that the soldiers turned into makeshift steps.

“We would work our normal shift manning the tower then would spend at least three hours after work to fill HESCOs,” Mason said. “We had a forklift that we attached an Air Force pallet to. Used that to dump dirt as close to the HESCOs as possible then hand-shoveled all that was missed.

While two soldiers worked on the tower itself, putting it together piece by piece, two others would shovel sand and dirt, day after day — sometimes fighting against the elements, when the rain would wash away their hard work.

“Each shift would work on average three to five hours a day on HESCOs or building the tower after the shifts then use the rest of the time for PT, lunch or dinner and downtime to call loved ones,” Mason said.

Based on our math, which can be checked here, those four soldiers filled the HESCOs with 16,337 cubic feet of sand, which weighs in at roughly 1,633,700 pounds. That’s based on the average weight of one cubic foot of sand coming out to 100 pounds, give or take a few. Read that again, slowly: One million, six-hundred-thirty-three-thousand, seven hundred pounds of sand.

That’s the equivalent of 12 M1A1 Abrams Main Battle Tanks — or 11 M1A2s, since their upgrades make them a bit heavier. Some other fun or exhausting ways to look at this include: Enough sand to fill 782,139 20-ounce bottles of Mountain Dew, or roughly 13,035,653 cans of Grizzly Wintergreen long cut dip.

It would have taken a C-17 Globemaster III aircraft, which can carry up to 170,900 lbs, between nine and 10 trips to transport that much sand. Notably, the C-17 aircraft is the workhorse supporting the military’s massive and sprawling global logistics chain. That cargo plane would need multiple trips for this much dirt.

But the soldiers, for their part, didn’t seem the least bit bothered. In fact, they almost seemed surprised that anyone would ask about any of this.

“We needed to do it so we could better our situation and the soldiers coming in behind us,” Mason said.

“Of course we knew deployment was gonna have some days where it was gonna be longer and harder than most and we just kind of embraced it and made it fun,” he said. “And when it was completed we were all extremely happy and felt accomplished.”

And it’s that sort of attitude that makes this story so damn necessary: These guys moved 1.6 million pounds of sand, by hand, over two months and never would have imagined or expected recognition.

It’s the kind of tiresome work that service members do each and every day around the world, until the fruits of their labors — sprawling fortifications of HESCO, defensive walls, fortified positions, makeshift bridges, and all manner of necessary creations —  just blend into the background. They become easy to overlook, and the work required to make such things becomes thankless.

But not today. Here’s to all those poor souls who have ever held a (now-bent and twice-cursed) E-tool, as they toiled away in the hot sun, moving mountains, turning big piles of dirt into little piles of dirt, as they fill sandbags and HESCO barriers by hand, all day, every day, for government pay. To Sgt. Justin Mason, Spc. Devin Young, Cpl. William Myers, Master Sgt. Jonathan Means, and every other weary soldier, sailor, airman, or Marine, out there who looks at these photos and knows in their bones what it took to make that happen: We salute you.