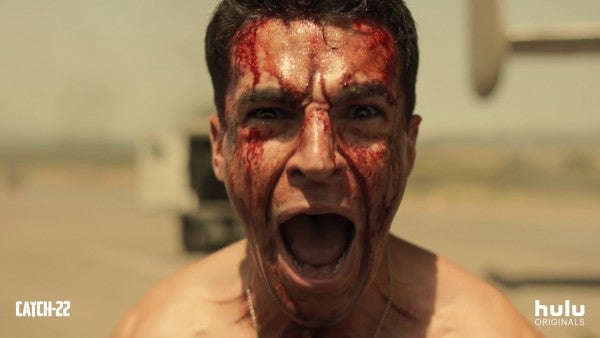 The first trailer for Hulu's remake of Joseph Heller's World War II satire Catch-22 just dropped, and it looks like it's going to be the dark, hilarious, and sarcastic war story you've been waiting for.

Directed by George Clooney, the six episode miniseries was announced last year and is set to premiere on May 17. An adaption of Heller's 1961 novel, it's not the first time the story has hit the screen — in 1970, Alan Arkin starred in a remake of the black comedy. But based on the trailer, Hulu's version will take a grittier approach to the the insanity, hypocrisy, and dangers of war and military service.

In an interview with Reuters, Clooney said the aim of book, and the series, was “to make fun of all the red tape and bureaucracy of war and the ridiculousness of war.” In addition to directing, Clooney has a supporting role as Scheisskopf, a hardass training commander whose judgement and sanity are questionable at best.

“I think it still plays,” Clooney added. “All of us spend our days and nights worry about those situations. This story is just reflecting on the insanity of it.”

For those who haven't read the book or seen the original film, Catch-22 is not a heroic war story. Set during the height of World War II in Europe, it follows Capt. John Yossarian (played by Christopher Abbott in the Hulu series) as he does everything in his power to avoid being a hero — frantically dropping his payload as early as possible on missions, missing the target in the process, all so his plane can have a few more seconds to get the hell out of the area.

And the Army Air Corps bombardier is right to focus on self preservation; after all, war is fucking dangerous. Here's an exchange between Yossarian and his squadron-mate and foil, Clevinger, in Heller's original novel that sums it up:

“They're trying to kill me,” Yossarian told him calmly.

“No one's trying to kill you,” Clevinger cried.

“Then why are they shooting at me?” Yossarian asked.

“They're shooting at everyone,” Clevinger answered. “They're trying to kill everyone.”

“And what difference does that make?”

But it's not the German planes or anti-aircraft guns that are likely to get him and his fellow aviators killed, it's their own goddamn command, who insist on raising the number of required missions the men have to fly before they can rotate home. The only way to stay on the ground? Be so damn crazy you can't fly. And there's the titular catch: only a madman would fly, and if you want to be grounded all you have to do is ask, but if you ask you're clearly sane enough to fly.

In the words of Yossarian “That's some catch, that Catch-22.”

Hulu's Catch-22 premieres May 17 on the streaming service.

See Also: History Channel special looks at the wartime service that shaped some of America's presidents