The ​Hurt Locker​ will be getting the high-def treatment come Feb. 4, when Lionsgate releases it on demand in "Digital 4K Ultra HD." We can't wait... 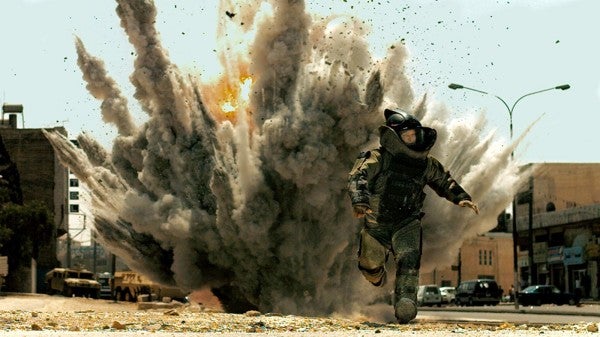 TheHurt Locker will be getting the high-def treatment on Feb. 4, when Lionsgate releases it on demand in “Digital 4K Ultra HD.”

And you know we just can't wait.

After the2008 release of Kathryn Bigelow's war drama, the film was praised far and wide. Roger Ebert compared the movie's central character, played by Jeremy Renner, to a surgeon “who focuses on one part of the body over and over, day after day, until he could continue if the lights went out.”

In a review for The New York Times, A. O. Scott remarked that “If The Hurt Locker is not the best action movie of the summer, I'll blow up my car.”

In the face of such acclaim, it's not surprising the war drama took home a slew of awards, including six Oscars.

But in the years since, otherreviewsbegancropping up from within the military and veterans community. They were less kind.

These days, if you ask people to describe The Hurt Locker in a word, you'll hear: cringeworthy; hyperbolic; unrealistic; overdone; garbage; inaccurate; cliché; ow; don't; godawful; hurting; painful; among others.

It seems that much of the praise that had been doused on The Hurt Locker has gone up in flames. All that's left is a raging dumpster fire of technical inaccuracies, absurd plot lines, and cowboy caricatures of actual service members. Even though the movie managed to cram so much into two hours, it somehow left all the believable elements of the Iraq War on the cutting room floor, all in favor of an adrenaline rush and the satisfaction of providing a neat little narrative about “why soldiers go to war.”

When Task & Purpose got a press release announcing that The Hurt Locker was getting a 4K Ultra HD face lift, we didn't quite know how to process it, so we had a little brainstorming session.

Here are some headlines that didn't make the cut:

You can watch The Hurt Locker in high-definition come Feb. 4, 2020, but why would you?