Boot-shaming is a time-honored U.S. military tradition that goes back to at least World War I. It's also, apparently, the original source of some of a well-worn piece of digital slang 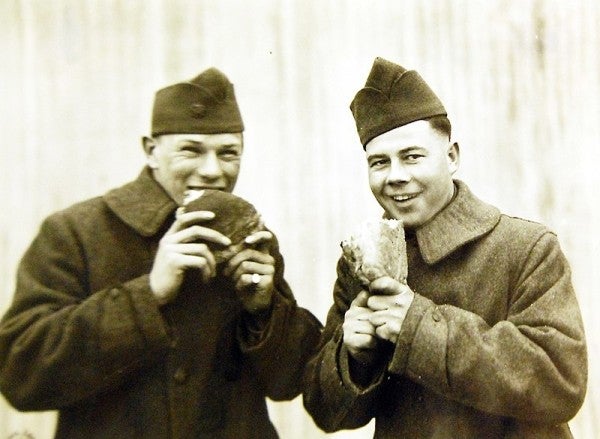 Boot-shaming is a time-honored U.S. military tradition that goes back to at least World War I. It's also, apparently, the source of a well-worn piece of digital slang.

According to a delicious morsel of archival research that surfaced on Twitter over the summer, the phrase 'IDK' (or “I don't know) originated in the language that WWI-era American doughboys used to harass new guys in the unit.

“'I.D.K.,' is latest U.S. soldier slang,” boasts the headline of a one-sentence news story from the August 9, 1918 edition of The Wichita Beacon. The latest slang, the Beacon writes, “stands for 'I don't know' in reply to fool questions asked by recruits and men who have just landed.”

Though we modern communicators like to think phrases like “IDK,” “IMO,” “LOL” and “OMG” stem from texting and online messaging, the reality is some of our most beloved sayings go back way, way further than that.

If the original Beacon reporter heard specific examples of “IDK” being used by America's fighting forces over a century ago, he or she left it out of the story, but we can only imagine that the interactions went something like this:

Pvt. Freshface: “Hey lance corporal, any word on when we're going to fight Jerry? I'm dying to get a Kraut bayonet for my dame back home.”

It's worth noting that, beyond “IDK,” the early 20th century saw an explosion of acronyms, thanks in part to a proliferation of wartime phrases such as “AWOL,” as the New York Times reported in 2010 — a deeply unsurprising fact given how fond the U.S. military is of its acronyms.

Speaking of which, here's another random linguistic fact that will be sure to impress new friends around the smoke pit: a lot of those acronyms that stream out of your mouth in the military technically weren't actually acronyms, but an initialism.

Initialisms are when you pronounce each letter of the thing you're talking about, like CIA, FBI, USMC, KIA, OMG, NCAA and such. These are different from acronyms, which occur only when the letters involved are not pronounced individually, such as in NASA, NORAD, CENTCOM, SEALs, and POG.

Now you know, and knowing is half the battle. So next time you find yourself saying the initials “IDK,” thank a doughboy!