The newest trailer for "John Wick Chapter 3: Parabellum" just dropped and it's got everything you expect, plus a few surprises you didn't. 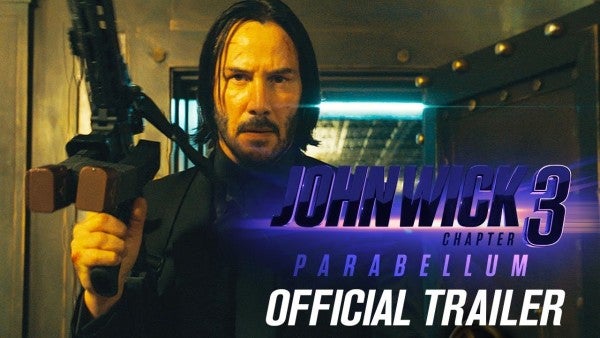 Never bring a knife to a gunfight. Unless you're John Wick, in which case you can bring whatever the fuck you want — a pencil, a katana, a stolen horse, a set of antique knives, a crotch rocket, or a pair of flak-jacketed war dogs.

Either way, the result's going to be the same: John Wick is the only one walking away from that fight.

As the new trailer for John Wick Chapter 3: Parabellum makes abundantly clear, the titular hitman is as heavily armed and deadly as ever.

The third installment in the hyper-stylized action series takes is directed by Chad Stahelski and written by Derek Kolstad, and picks up right where John Wick: Chapter 2 left off. Keanu Reeves again stars as the formerly retired, now rampaging gunslinger. Excommunicated from the secret world of super assassins, and with a multi-million dollar bounty on his head, John Wick is forced to flee, or fight.

You can guess which one he chooses.

No longer able to re-up and rearm at the Continental, a network of safe harbors masquerading as high-priced hotels for hired guns, Wick turns to the few remaining friends he has: fellow assassin, Sofia (Halle Berry), who greets John by shooting him in the chest (I guess that's just how assassins say “hey, you should really call more often”) and setting one of her kitted-out war dogs loose on some poor villain's nuts.

It also looks like Winston (Ian McShane), the owner of one of the Continental hotels and a bit of a surrogate father to Wick, is back on his side. In the trailer, we hear Winston ask “what do you need,” to which Neo replies: “Guns, lots of guns.”

Oh wait, sorry, did I say Neo? Honest mistake: there's just something familiar about that line…

Aside from a thinly veiled head nod to The Matrix, the newest Wick flick has all the fare you've come to expect: Frenetic gunfights, bloody hand-to-hand combat, and some outrageous, but beautifully choreographed combat sequences, like when Wick takes on a cadre of sword-swinging bad guys on motorcycles, or when he goes charging down a busy city street on horseback and shoots another goon right in the face.

John Wick Chapter 3: Parabellum hits theaters May 17, and when it does, you can bet your ass that the Boogeyman is prepared for the war ahead.