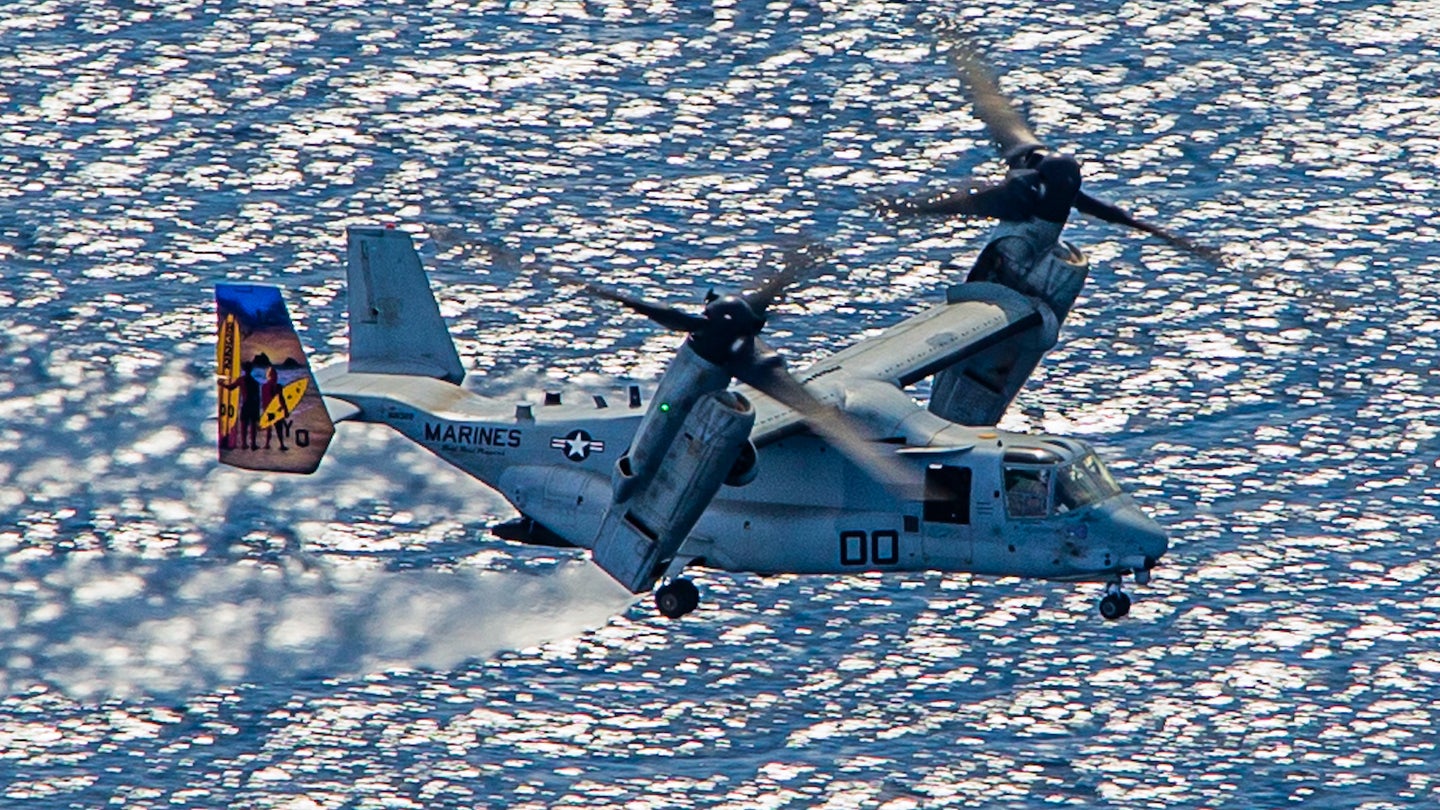 U.S. Marines with Marine Medium Tiltrotor Squadron 268 operate an MV-22 Osprey during a maximum aircraft launch exercise over the island of Oahu, Hawaii, Dec. 2, 2020. VMM-268 conducted the training in order to showcase their ability to fly with a large amount of aircraft and increase combat readiness. (U.S. Marine Corps photo by Cpl. Jacob Wilson).
SHARE

As longtime readers know, we here at Task & Purpose are big fans of unusual military paint jobs of all shapes and sizes, and the tail art for Marine Medium Tiltrotor Squadron 268 does not disappoint.

Photos recently published to the Defense Visual Information Distribution System (DVIDS) earlier this month show Marines from VMM-268 operating an MV-22 Osprey (register number 168322) with some distinctive tail paint during a maximum aircraft launch exercise over the island of Oahu, Hawaii on Dec. 2, 2020.

VMM-268 conducted the training, which saw the squadron launch eight Ospreys in quick succession, “in order to showcase their ability to fly with a large amount of aircraft and increase combat readiness,” according to the Marine Corps.

The tail paint on this particular Osprey, which features the silhouette of two surfers and an Osprey painted against a brilliant sunset, was inspired by the poster art for The Endless Summer II, the 1994 sequel to the beloved 1966 surfer classic The Endless Summer, according to 1st Lt. Bridget Glynn, a spokeswoman for the III Marine Expeditionary Force.

According to Glynn, this unique tail art in the photo was painted in early 2019 by Shayne Meder, an Air Force veteran who for the last several years has transformed various U.S. military aircraft a canvas for her imaginative paint jobs.

“The previous VMM-268 commanding officer came up with the design,” Glynn told Task & Purpose, noting that the Osprey’s previous tail art also contained a silhouette of the two surfers from the Endless Summer II.

Indeed, earlier photos of the same aircraft from 2018 show the shadows of the two surfers as well as that of the state of Hawaii.

Despite the recent addition of the more colorful tail paint and it’s departure from the standard “Red Dragons” that correspond with VMM-268’s nickname, the Endless Summer motif is not a new fixture to the squadron’s arsenal of fantastic paint jobs.

According to Glynn, this design actually originated during Operation Desert Storm in 1990 after the squadron — operating at the time as Marine Medium Helicopter Squadron 268 (HMM-268) — had its deployment continually extended.

HMM-268 spent Desert Storm providing combat assault support to the 5th Marine Expeditionary Brigade, including the tactical insertion of Marines along the Saudi Arabian-Kuwaiti border during the outset of the U.S. military ground offensive in the conflict.

Today’s tail art on the particular Osprey featured in the recent DVIDS photos “has the addition of the Lanikai ‘Mokes’ to demonstrate for our location here in Hawaii and our connection to the community,” Glynn told Task & Purpose.

Here’s to you, Marines of VMM-268, for your creativity and spunk. There’s a reason your motto is “just real players.”