The official Facebook page for Marine Corps Recruit Depot San Diego seems to be having a bit of a technical crisis... 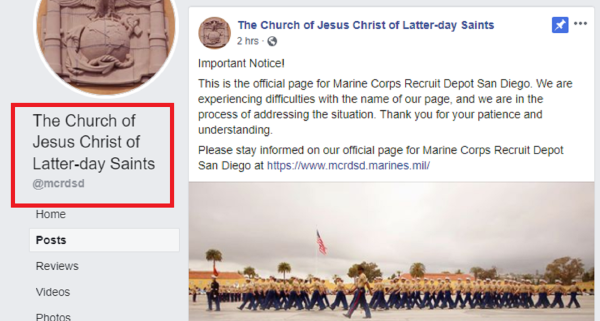 The official Facebook page for Marine Corps Recruit Depot San Diego appears to be suffering from some major technical problems: As of Thursday evening, the Marine Corps' West coast boot camp renamed itself “The Church of Jesus Christ of Latter-Day Saints,” on Facebook.

It's unclear when exactly the name-change occurred, but a Facebook post went up at around 4 p.m. ET on Thursday addressing the issue and asked readers to remain calm.

“This is the official page for the Marine Corps Recruit Depot San Diego. We are experiencing difficulties with the name of our page, and we are in the process of addressing the situation,” reads the Facebook post, which has since been taken down. “Thank you for your patience and understanding.”

As of Friday morning, the Facebook account for MCRD San Diego appeared to have been temporarily suspended.

“Our understanding is that the unit recognized the page was compromised and took immediate actions to lock the page and rectify the issue,” Capt Joseph Butterfield, a Marine Corps spokesman based at the Pentagon, told Task & Purpose.

“I can also confirm that Marine Corps Recruit Depot San Diego remains focused on taking quality recruits and transforming them through the foundations of rigorous basic training, the Marine Corps' shared legacy, and a commitment to our Core Values,” Butterfield added. “They have not changed their mission or function to that of The Church of Jesus Christ of Latter-day Saints.”

Officials with MCRD San Diego did not respond to request for comment.

While the Marine Corps may be trying to reassure folks that it has not become a religious organization, some commentators on the Facebook page couldn't help but point out the similarities between the two organizations:

This very bizarre story will be updated as we get more information.