Every American knows the Navy SEALs, but few can tell you what SWCC stands for. Founded in 1987, the Special Warfare … Continued 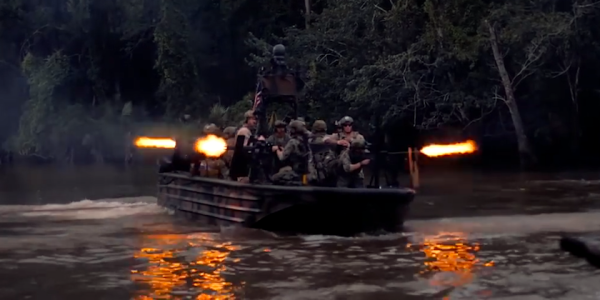 Every American knows the Navy SEALs, but few can tell you what SWCC stands for.

Founded in 1987, the Special Warfare Combatant-craft Crewmen operate the lightest and fastest watercraft in the service in support of U.S. special operations forces. They are the elite descendants of the muscular PT and Swift boats of conflicts past and a critical component of the clandestine infiltration and exfiltration activities that define special operations under Naval Special Warfare Command.

They also pack a wallop, as evidenced in an Oct. 23 Navy recruiting video that prominently features SWCC personnel, uh, blowing off some steam:

The Navy recruiting spot itself details the intense 37-week training course required to join these specialized boat units, and the footage of heavily-armored boats tearing into hostile foliage is one hell of a recruiting tool.

I'm too old to join up myself, but you can learn more about the world of SWCC here while I just watch this GIF over and over again.

The hills are alive … with the sound of gunfire:

SEE ALSO: Here’s The Technique Navy SEALs Use To Swim For Miles Without Getting Tired