If it looks too good to be true, chances are it probably is 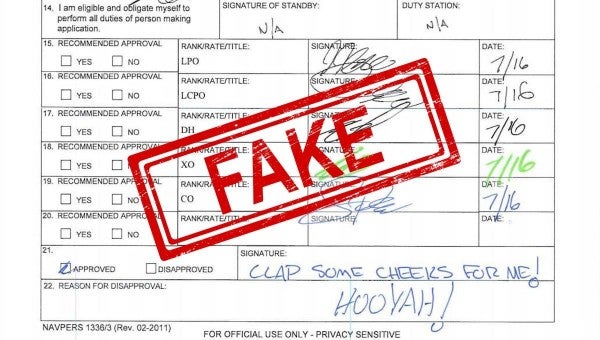 That's certainly the case with this wholly fake (but totally hilarious) special request chit for 72 hours of leave for the
upcoming fictional assault on Area 51 that's circulated on social media in the last few weeks.

The document, which first appeared on the Navy-centric Facebook page
Shit My LPO says 4 — Operation Enduring Memes, features a humble plea to allow a fictional submariner from the USS Ohio nuclear submarine “to storm Area 51 and clap them alien cheeks.”

The signature on thee approved form? “Clap some cheeks for me! HOOYAH!”

Sadly, your suspicions were right: it ain't real.

“I can confirm that hat special request authorization sheet did not originate on USS Ohio and is not an authentic Navy document,” Lt. Mack Jamieson, spokesman for Submarine Group 9, told Task & Purpose.