The Walt Disney Company just announced that its brand-new online streaming service, aptly titled Disney+, will launch an all-out assault on eyeballs around the world starting on November 12th 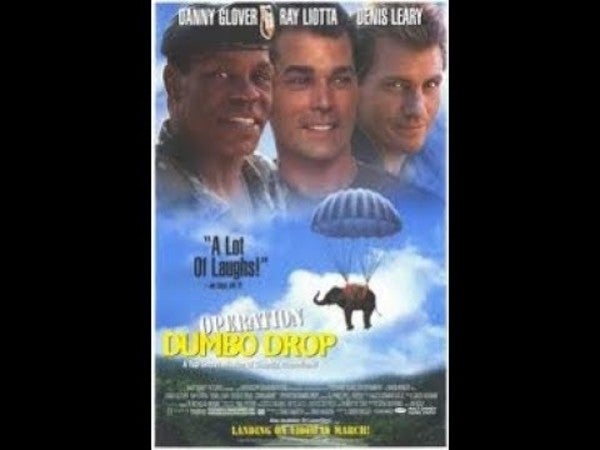 While America's forever wars continue to rage abroad, the
streaming wars are starting to heat up at home.

While the initial Disney+ content lineup looks like the most overpowered alliance since NATO, there's one addition of particular interest hidden in Disney's massive Twitter announcement, an elite strike force with a unique mission that stands ready to eliminate streaming enemies like Netflix and Hulu no matter where they may hide.

That's right, I'm talking about
Operation Dumbo Drop — and no, I am not fucking around.

What's that? You've never seen Operation Dumbo Drop? Who are you? Who hurt you? Have you even read the official synopsis, the one in which Army Special Forces legends Roger Murtaugh and Henry Hill have to basically pull a Weekend At Bernie's with a fucking elephant in the jungles of Vietnam?

Soon-to-retire Captain Sam Cahill (Danny Glover) and his unit labor to build a secret relationship with a local Vietnamese village in order to conduct surveillance on an enemy weapons-smuggling operation that goes through on a nightly basis. When the enemy discovers this, they kill the village's elephant as a punishment. Cahill, his replacement Captain T.C. Doyle (Ray Liotta) and a team of special forces must locate and transport another elephant in time for the village's spiritual event.

Joking aside, the story that inspired the kid-friendly Disney flick is actually quite incredible: In 1968, 5th Special Forces group Capt. John Scott Gantt devised an unlikely scheme to transport a pair of elephants across the war-torn country by helicopter to a remote Montagnard village.

But as Gantt revealed at the time of the film's release, the mission — called 'Operation Barroom' rather than 'Dumbo Drop,' because lol — had little to do with some kind of spiritual event or rebuking a faceless enemy and everything to do with teaching Montagnard villagers how to produce lumber at a newly-established sawmill as part of Army Special Forces' civil affairs framework at the time.

Here's the gist of it from Gantt's fascinating 1995 conversation with The Spokesman-Review:

Part of the Special Forces mission was to recruit and train soldiers from the Montagnard villages that dotted the mountainous central regions of South Vietnam. The Green Berets used lumber imported from the United States to build the training camps, and at $4 per 2×4 board, they knew they were paying too much.

The local forests were rich in mahogany, and Gantt reasoned that the Montagnards could likely be trained to cut their own lumber. So he talked the Army into buying a small, used sawmill from an Australian company.

The villagers caught on quickly. “Within six months, Tra Bong was totally self-sustaining. They had cut, by hand, and rolled in by hand, all of the trees big enough to make lumber out of within half-mile of the camp. They'd cleared a massive forest. And they came to us and said 'Hey, we need a way to get logs to the sawmill.”'

They tried trucks, and caterpillar vehicles, and within six months the rough terrain had destroyed them all. “The village elders came up with an idea,” Gantt says. “They said 'We used to do this a long time ago with elephants.' And that's when the colonel said 'Gantt, get elephants.”'

For a complete rundown on the insane story of Operation Barroom, I highly recommend this excellent 2015 history published over at SOFREP, and be sure to check out The Verge for a full list of every movie and TV show coming to Disney+ in November. In the meantime, enjoy this excerpt of the Disney film in case you need a reminder of what you're getting yourself into.

A scene from 'Operation Dumbo Drop'