There's a video going around purportedly of soldiers in an unnamed African country jumping out the back of an aircraft, and unfortunately they can't jump good. 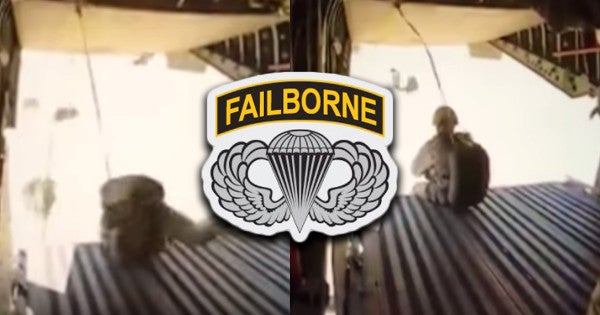 There's a video going around, purportedly of soldiers in an unnamed African country jumping out the back of an aircraft, and unfortunately they can't jump good.

First posted to Facebook, the now-deleted video was later captured by the folks over at The Aviationist for posterity, which is great, since this should probably be taught at Airborne School as an example of what not to do. All it needs is some Benny Hill music.

“Whoever the unit is in the video, and no one is giving them credit (or blame…), they demonstrate about every aircraft exit mistake a static line parachutist can make short of actually forgetting to hook up their static line,” wrote The Aviationist's Tom Demerly.

Task & Purpose reached out to Africa Command to ask whether the video was indeed from Flintlock 19 and what unit was involved. We'll update this article if we hear back.

But for now, here's the play by play:

The first guy awkwardly walks toward the back ramp then turns sideways as if he's going out the side door of the aircraft. Which is weird and unnecessary. Second guy then makes like he is doing a free fall jump instead of a static one, and then, remarkably, the third guy does a fairly graceful exit.

The fourth guy, however, face plants ahead of the ramp, then falls out sideways. Then guy number six decides to work himself off the ledge via his ass. Later, another guy does almost the same thing.

If only there was a military version of Ridiculousness…